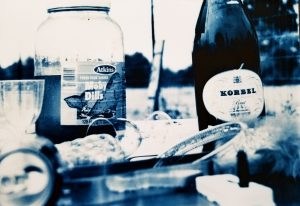 Of all the New Year’s Eves I’ve celebrated, the most eclectic was the turn of the century; December 31, 1999. We’d just purchased our central Texas ranch and managed to put a camper on the premises. What a great place to hang out as we faced the unknown.

After all, fears of Armageddon rang in the air. Companies feverishly re-programmed computers that were supposed to go haywire because computer operators hadn’t written code to handle the change from 1999 to 2000. (Remember Y2K?) We didn’t know if we would wake up to a world gone dark. Just to be on the safe side, we’d stocked up on some canned goods.

My daughter came in from college, and my brother-in-law invited his wife’s family (two adults and seven children) to join the festivities. New Year’s Eve was mild, and we were able to sit on our patio and play Mexican train. Because the flies were thick, I hung flypaper from the rafters, which got tangled in my daughter’s celebratory tiara.   Before the century dawned, the guests had clogged up the camper’s toilet requiring all the carpet to be pulled, eaten hot dogs and pickles, and generally made a nuisance of themselves.

Determined to be awake at midnight, something I haven’t done in years, we built a roaring campfire and eyed our watches, waiting for the big moment. We had no TV nor smartphones to signal the new year. We did, however, hear blasts of fireworks in the distance to confirm that a fresh century was underway. And, lo and behold, the electricity stayed with us.

I’m not sure whether the non-Y2K event left me relieved or a bit disappointed. For sure, I was irritated that the stock of goods awaited us on future visits. My husband has cursed himself ever since for the cans of Dinty Moore stew he had squirreled away. They were so unpalatable he couldn’t make his way through them.

Today, along with memories, I have this awesome picture my daughter (Karen Watts Lively), an award-winning photographer, snapped, called, “The Party’s Over.”

Here’s to an unforgettable end to the decade to you and your loved ones.