FAYETTE COUNTY, TEXAS AND THE SPANISH INFLUENZA OF 1918 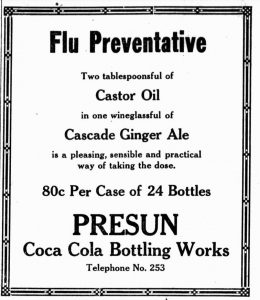 What is commonly known as the Spanish Flu Pandemic of 1918 was actually an H1N1 virus of avian origin.  It spread worldwide from 1918 through 1919.  In the United States, it was first identified in World War I military personnel in the spring of 1918.  Fayette County soldiers stationed in France such as African American James Poole, who delivered ammunition to the front lines, fell victim to the disease.  He survived but was later discharged as physically unfit for duty.

This savage sickness caused victims to develop blistering fevers, nasal hemorrhaging, and pneumonia.  Many drowned due to fluid in the lungs. It is thought to have killed 675,000 in the U.S. alone.  While the flu died down during the summer, a deadlier strain took hold, and the movement of soldiers helped spread it around the globe.

During the war, the British, French, and Americans blocked journalists from reporting on the outbreak for fear it would hamper the war effort.  Only reporters in Spain, whose country was neutral in the war, raised the alarm.  Hence the name “Spanish Flu”.  That did not stop Americans from blaming the Spanish, however. A cartoonist for the Galveston News pictured the flu as a Spanish invader who burst from its grave to resume his attack on the city.

Physicians quarreled about its origin.  One prominent Chicago physician called it poison gas, presumably German gas; others claimed it was a new disease that has not been correctly analyzed by physicians.

A number of individuals downplayed its danger. An article touting Vick’s VapoRub stated there was no cause for alarm.  It was simply the Old Grip or La Grippe as in 1889 through1890.  All you had to do was to stay away from others with colds, eat well, stay in bed, take a laxative, and use Vick’s.

Rumors abounded.  A popular one was that conditions in military camps and hospitals were horrifying and that doctors and nurses were injecting flu germs into the men’s food.  Additionally, it was said that fake letters were being sent to family members, consoling them for the loss of loved ones who were actually alive.  Many of the rumors were attributed to German sympathizers.

Opportunists attempted to pass legislation lifting wartime prohibition because whiskey, medicinally used, was recognized to have great curative properties.  (Note:  In 1917, after the United States entered World War I, a temporary wartime prohibition was enacted to save grain for producing food.  Prohibition officially went into effect on January 17, 1920.)

The Texas State Health Officer C.W. Goddard stated that the first case of flu in Texas was reported on September 21, 1918.  Cases then began multiplying in different parts of the state.  He noted that citizens could reasonably expect their communities to suffer the penalty of their neglect.

Effective October 10, 1918, the city of La Grange forbade all public gatherings, closing pool halls, picture shows and theaters, schools, church services, and every other type of gathering or loitering.  The ban, however, did not last.  By October 31, the city reopened but urged those who were sick stay at home until the doctor determined you were not spreading the disease.  Other groups, such as the Red Cross, however, did postpone meetings.

Not all schools closed. Tyler Commercial College in Tyler, Texas, announced on October 31, 1918, that it would remain open.  By May 9, 1919, the institution was urging students to stop worrying about war and flu and prepare for the future.

In December 1918, Goddard reported that Texas has 128,000 cases and 6,000 deaths from the pandemic.  Undertakers were unable to supply coffins and bodies were buried in pine boxes without any death or burial permit.  He appealed to citizens to practice general preventative measures of isolation, quarantine, disinfection, and improvement of hygienic and sanitary conditions to help control the virus.

Meanwhile, the newspapers were full of advertisements:

On January 8, 1919, Flatonia closed its schools, churches, picture shows, lodges, and society public gatherings. By January 16, so many were ill that the supply of beef soup bones was not sufficient to keep up with the demand.

La Grange High School held its commencement at the Casino Hall in May 1919.  In his address to the graduating class, Mr. C.D. Krause, the La Grange school board president, said:

“This class, more so than any other in the history of the La Grange schools, passed through a very trying ordeal.  Not only had they to contend with the discomforts and disadvantages of an antiquated building, unsuitably located and not adapted to school purposes, but also with the unrest, excitements and interruptions due to the war and the ‘Flu’ epidemic.  The war and ‘Flu’ were unavoidable but the other conditions are inexcusable.  Nevertheless, the class has done its work well and the graduates merit their diplomas and our congratulations.”

Why the Second Wave of the 1918 Spanish Flu Was So Deadly accessed April 23, 2020, at https://www.history.com/news/spanish-flu-second-wave-resurgence.

The following Newspapers were accessed April 21, 2020, from University of North Texas Libraries, The Portal to Texas History, https: Texashistory.unt.edu.