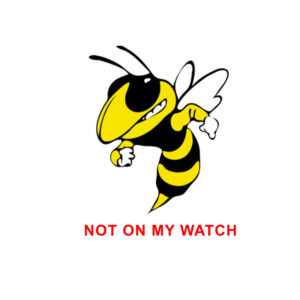 Yellow jacket stings gave me a crude welcome last week.  I retaliated the first time by spraying the crap out of the nest on the door to my office.  Four days later, the same thing happened, this time from a house above the entrance.  Again, armed with long-stream wasp and hornet spray, the favor was repaid.  Since these colonies can grow to two to four thousand members, nipping the construction in the bud was a good idea.

Besides, the stings were extremely painful—shoulder, back of the neck, and elbow.  These insects are aggressive, nothing timid about them.  They attacked before I saw their growing abode.

Then, too, they love sweet drinks such as wine and soft drinks as well as picnic fare.  These creatures also feed on other insects like flies and bees, carrion, and flower nectar.  Since they are capable of ranging a mile from the nest, the idea that one would land in my glass of Ménage à Trois (house wine) and I could accidentally gulp it down, horrifies me.

The roles the yellow jacket culture assigns to its male and female members are astonishing.  (I’m just imagining how my life would have turned out if we had even a smidgen of power Ms. Yellow Jacket has.

The queen is it!  This reproductive female collects wood and begins the nest in spring.  She reproduces with stored sperm from a male.  The first offspring are sterile daughters.  Just like Cinderella, they build and maintain the nest, look for food, and care for their siblings.  Now the queen’s sole responsibility is to manufacture more eggs.  Not until late summer will she produce males and reproductive females.  These workers then take over the tasks of the sterile daughters, care for the queen and larvae, and handle colony defense.

Alas, all good things must end.  The queen who began the nest dies, sending her reproductive females into the world to perpetuate the race.

Males called drones come from eggs the queen has chosen not to fertilize and therefore cannot sting.  Plus, they only have half the genes of the rest of the colony residents.  The male drone exists to wait until the queen is ready to be fertilized.  Once he does his duty, he dies.  (Wow!  No messy entanglements with exes.)

A few things to keep in mind while trying to keep them from joining you this summer.

If they have moved in, there are several ways to deal with them.  One is a trap.  Basically, they are lured in by a scent and then can’t leave.  But then, you have a container full of them and not all are dead!  One solution—stick the trap in the freezer until they are icicles.  For anyone queasy about killing living things, you can use peppermint oil.

The problem with these tactics is you don’t get the queen!  She’s safe and secure in her nest, making babies.  You’re only getting rid of the workers.  By the time you’ve cleaned up the mess, more workers will have arrived.

Nope, for me, the solution is a highly poisonous spray.  The stream shoots so far that I can stand back to do the deed without the suckers coming after me.  They are stunned and fall immediately to the ground.  Nice and dead.  If they’re still fluttering a bit, I crush them with my heel.

Trust me.  Good old-fashioned pesticides are the way to go.

Have a great summer.  Stay safe out there.

You can find more Stories About Life here.