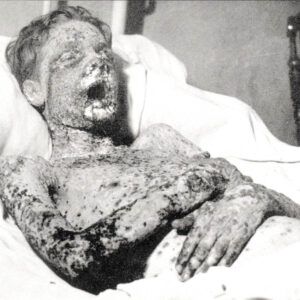 Apparently, the lessons learned from smallpox are being ignored when dealing with COVID.

The ugly disease had been around almost three thousand years until it was officially declared eradicated in 1980 after an aggressive worldwide vaccination campaign. (Mind you, an effective vaccine was invented in 1796.)

The symptoms were horrendous—high fever, head and body aches, and sometimes vomiting. A rash followed that spread and morphed into raised bumps that crusted, scabbed, and fell off after about three weeks, leaving pitted areas. Death occurred in about thirty percent of the cases. Many survivors had permanent scars over large areas of their bodies, especially their faces. Some were left blind.

To get a feel for the reason it took over 180 years to get rid of this preventable disease, I turned to my community’s newspapers from the 1890s through the 1920s. What an eye-opener.

By 1891, it was clear to Texans that the vaccine was safe and effective and that mitigation measures such as quarantining worked. The La Grange, Texas newspaper ran an interview of an esteemed physician from San Antonio, Texas who reported the success of San Antonio’s aggressive campaign against smallpox. School children were required to be immunized and, when a case was reported, the health authorities swooped in, putting residents in quarantine and posting a yellow flag at their house, warning others away.

In fact, in 1905, the Supreme Court ruled in Jacobson v. Massachusetts that the government had the right to mandate vaccination. Writing for the majority, Justice John Marshall Harlan, while acknowledging the importance of personal freedom, stated, “the rights of the individual in respect of his liberty may at times, under the pressure of great dangers, be subjected to such restraint, to be enforced by reasonable regulations, as the safety of the general public may demand.”

However, personal freedoms apparently trumped the public good in my county. In the 1920s, smallpox was still terrorizing area citizens.

The Schulenburg, Texas newspaper editor, panicked by a new wave of smallpox rumors in 1926, asked the county judge and county health officer, Dr. Knolle, to inspect. The Charles Nordhausen family was indeed found to be infected. They were quarantined and flags were hung at their residence. According to the article, the quarantine could last three or more weeks. During this time, household members could not leave the house, nor could anyone enter. Furthermore, mail could not be sent from the house.

Dr. Knolle stated it was the height of folly not to be vaccinated. The editor pleaded with readers:

If this disease is permitted to spread deaths will result, little children will be crippled for life, to prevent this we are trying to stop it before it gets started. We want the cooperation of all the good men and women of our section to stamp out this disease.

The Fayette County, Texas newspapers from the 1900s to the 1920s are rife with mention of the cost of failing to vaccinate. The county paid expenses submitted by physicians dealing with smallpox. Dances and events were postponed. Travel between Fayette County and neighboring Colorado County was curtailed.

LESSONS LEARNED FROM SMALLPOX THE VACCINE CAN HAVE SIDE EFFECTS

In 1926, the Schulenburg, Texas newspaper had this to say about the vaccine:

A number of our people have been vaccinated. This is a good idea and it is a positive preventative. At the same time it causes a lot of sore arms, some fever and other discomforts. Whether the situation is threatening enough or not we will leave to our readers.

I don’t know about you, but I do not look forward to spending the rest of my life under the cloud of COVID.

Please, if you haven’t already, get vaccinated.