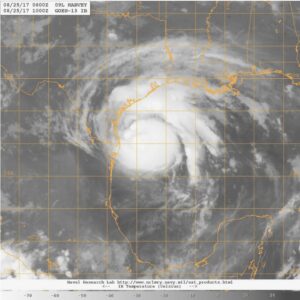 Hurricane season dredges up memories, especially as another one is forming in the Gulf of Mexico.

The first serious storm I survived was Carla, which hit Texas in 1961.  We huddled in our home along with the preacher and his wife who took shelter with us due to a large tree looming over the parsonage.

Although the storm struck approximately 123 miles from our home in Baytown, the damage to our area was significant.  The subdivision next to ours, Brownwood, was overwhelmed with water from Galveston Bay.  Some houses outright vanished, and the remaining ones were filled with salt water, leaving nasty rings of grime at the water mark.  The National Guard monitored who came and went.  My mother would go to the church and pick up mounds of clothes to wash for the survivors.  Brownwood never recovered from the devastation and the ensuing subsidence caused by industry.  Today it is a nature center.

In 1983, I escaped Alicia by a few hours.  At the time we were living in New Orleans but had been in Houston house hunting.  We were scheduled to fly out the next afternoon.  Spooked, I insisted we move up our flight to that morning.  I was not about to ride out the storm a hotel with a four- and six-year-old!  As we taxied down the runway, the rain was coming down in sheets.  Any later and we would have been stranded.  Fortunately, the home we put under contract survived the storm with no damage.

This monster hit right after Katrina in 2005.  While I wasn’t affected, I did spend two weeks working volunteer duty with the Red Cross.  First, I was flown to Washington D.C. to receive training at their headquarters and then spent the rest of my time in the Beaumont Convention Center sleeping on an air mattress.  My job was being the human resource manager for some two hundred volunteers at the center.  Volunteers came and left daily.  This experience is worth a blog in itself.  (Oh, the stories I can tell!)

And then, four years ago, Harvey came knocking.  Being a veteran at storms, the days before were spent feverishly working to secure flying objects and batten down the hatches.  Locking the shutters of the Historic N.W. Faison House in La Grange was completed just before the rain began to fall.

At peace, we settled in our nest as the rain began Friday evening.  By Sunday afternoon—and thirty inches of rain—I was ready to scream!  My understanding of how people could be driven crazy by the dust and howling winds of The Great Depression grew after listening to the relentless voice of nature outside.  We were trapped for the weekend, unable to leave the ranch due to flooded roads, but our electricity held.

We were luckier than many in our area.  Our only damage was a leaking roof and my blown-out knee.  By Monday we were able to make it to town.  I stepped out of the truck at my favorite taqueria and my knee buckled, putting me on crutches and searching for cures.  To date, I’m controlling it with acupuncture.

I’ve been through so many I can’t even remember their names.  Some were so wimpy that I reported to work (just another rainy day).  Several times I’ve gone outside to enjoy the respite from the rain during the eye of the storm.  By moving to the country in 2003, I was spared the wrath of Ike.  I did, however, have a job in Houston that was postponed because of the destruction.

Do you have a favorite hurricane story to tell?