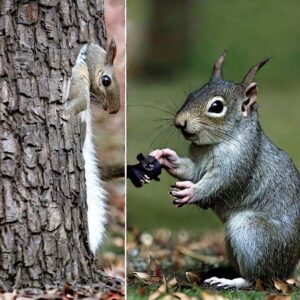 Historically, the squirrel is America’s most popular pet. In fact, in the 18th- and 19th centuries, squirrels were fixtures in American homes. Sorry, dog and cat lovers, I am not joking.

HISTORY OF AMERICA’S MOST POPULAR PET

Squirrel ownership was in full swing by the 1700s. Acquired in markets and pet shops, the animals were found in homes of wealthy urbanites. Portraits of their children with a squirrel on a gold chain leash were not uncommon. Literature abounded to assist the pet owner in care and feeding of the creatures.

Putting squirrels in urban parks was done intentionally. By the mid-1800s, squirrels were nonexistent in cities. Then, urban areas began to build parks and plant trees. A few releases of squirrels into the parks occurred as early as 1847 in order to beautify and add interest to the landscape. The parks movement claimed that nature in the city was crucial for health and sanity as well as to provide opportunities for those who couldn’t leave the city. What’s more, feeding squirrels became a way to encourage children to adopt humane behavior. Even President Warren G. Harding kept one.

But, alas, tastes changed. By the 1910s, they were increasingly viewed as pests. From the 1920s to the 1970s, many states began to adapt laws that prohibited keeping wild animals at home.

According to the National Wildlife Federation:

MY PERSONAL FEELINGS ABOUT AMERICA’S MOST POPULAR PET

OK, I must confess. I have a love/hate relationship with the creatures. The low points are:

The high points are:

Sorry, squirrel friends. I know you can’t help it. In honor of National Squirrel Day, I filled my bird feeders so you could get some exercise performing a few aerobatic stunts and enjoy the crumbs the birds dump on the ground.