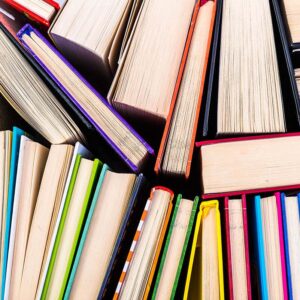 Banned books are nothing new. The first one likely outlawed in the United States was Thomas Morton’s three-volume New English Canaan, in 1637.  The tomes are a denunciation of Puritan government in the colonies and their policies towards Indians. He described the Indians as a far nobler culture and a new Canaan under attack from the “New Israel” of the Puritans. Plus, the man established the colony of Merrymount, located in Quincy, MA where he held a May Day festivity complete with a maypole. To the Puritans, he was a heathen. Plus, his colony was growing rapidly, taking income away from the Boston area.

Livid, the Puritans chopped down the maypole and banished him from the colony in 1628. Returning to England, he sued the colony and published his book. Many were burned, but a few survived in Amsterdam.

Aside: My new historical novel will begin with my Puritan relatives who arrived in Boston in 1630. My guess is they approved heartily of the move.

An amazing list of literary classics have been banned at some point:

MY THOUGHTS ON BANNED BOOKS

For Adults: If you don’t want to read something, don’t. However, it is not your right to dictate my reading choices. Different strokes for different folks. America, the land of the free and home of the brave. Yada yada yada.

Furthermore, at the age of 18, you are considered old enough to fight and die for your country. You are old enough to read any book and colleges should not ban professors from making any book required reading because of content or profanity. If you don’t like what’s taught in the class, don’t take it.

For Children: I understand that parents may not want their children to be exposed to certain books. I am fine with the system set up at Katy ISD where my daughter teaches. You may request to put a hold on your child’s record so he/she cannot check out a particular book.

To me, the public library and retail stores are a different matter. If you do not want your child exposed to what’s on the shelf, monitor his/her visits. The public library should not remove books because you don’t like them when others do.

BANNED BOOKS OVER THE TOP

So, this brings me to what has riled me up and made me choose this topic. One of our talented writers in my writers’ group, Carla Damron, has just released a new novel called The Orchid Tattoo. A social worker by trade, her novels explore social issues like addiction, homelessness, mental illness, and human trafficking. The new release tackles human trafficking.

I read the book and loved it. What a page turner. Additionally, although dealing with a difficult subject, the book was not too gritty. But it was almost banned from a public college honors fiction class.

Carla has been speaking with this group for several years concerning writing (she has an MFA).  The professor, however, was fearful of attacks from the state legislature and students because of the topic. Apparently some students had complained about the fiction they studied for content being too dark and serious. A complaint regarding profanity was lodged. At least now the students will be allowed to choose between Carla’s two books and hopefully will choose the new release.

The bottom line is that we need all sorts of books. Consuming material that makes you uncomfortable or challenges your assumptions is healthy. Even if you disagree with the author, you develop an understanding of differing points of view. This ability is crucial if we are going to live in harmony in our diverse culture.