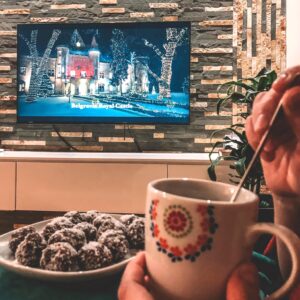 My husband’s binge-watching has certainly affected my mental health.  The other night, around one in the morning, I was in a dead sleep.  Suddenly, vicious barking and a huge slam jarred me awake.  I thought fighting dogs were throwing themselves against the furniture on my party porch.  (Remember, I live in the country so crazed animals are not something to ignore.)

I jerked up, scared sh.…ss.  All the while, the following was running through my head:  I need a gun to scare the m…..f……s off.  But my go-to twenty-gauge shotgun hanging on the closet wall is safety-locked and unloaded.  (I’d always counted on just cocking the thing and frightening the bejeebers out of anyone lurking outside.  But dogs would have no clue.) The next closest critter-chasers were in the gun safe. (Damn.  Where is that key?)

I jumped out of bed (Well, not really.  I wear a CPAP machine with a chin strap as well as eye covers to keep my eyes moisturized.  Disassembly took time.) and rushed into the great room only to find that the brutal howls of bloodthirsty canines were pouring out the surround-sound speakers.

After I asked my husband what the x?%%xtgw@&* was going on, he informed me that he was watching The Titans.  At least he turned down the volume a bit as he told me to go back to bed.

My heart was racing so badly it took hours for slumber to return.  I found out later that he had been binge-watching the show for several days and attack dogs were part of the modus operandi.

Now, I’m anxious that dogs might actually fight on my porch.  I need to re-think the shotgun idea and figure out how to have it ready for action in less than twenty minutes.

Seriously, though, binge-watching and mental health concerns are real.  According to verywell health, health experts are troubled because people binge-watch instead of exercising, socializing, or sleeping.  These individuals can then get on the slippery slope of heart disease, insomnia, depression, and behavioral addiction.

Suggestions to keep yourself out of the binge-watching syndrome include:

And, for God’s sake, if you must binge-watch, please keep the volume down (or put on a headset) so you will not affect your partner’s mental health.

Personally, I prefer a good book!