In honor of Black History Month, I am sharing this article I wrote for the historical series, Footprints of Fayette County.  The article is titled FAYETTE COUNTY JURY DERAILS CIVIL RIGHTS ACTIVIST. 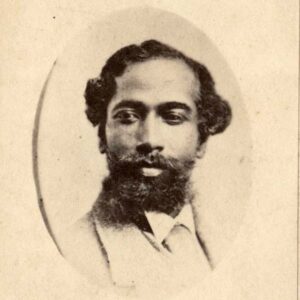 African-Americans learned that they were free from slavery on June 19, 1865. That freedom, however, did not include equal protection under the law. A case in point is Texas State Senator Matthew Gaines.

A literate freedman and Washington County resident, Gaines stood five feet tall and weighed one hundred twenty-five pounds. His fiery oratory, developed as a preacher, propelled his election to the Texas Senate in 1869.

While in office he was a tireless advocate for African Americans. Gaines sponsored a bill that exempted educational and religious groups who worked for educational improvements in their community from taxation as well as buildings and equipment used for charitable or literary associations. It became law in 1871.

Additionally, he was instrumental in ensuring the state took advantage of the federal Morrill Act of 1862, which led to the creation of Prairie View A&M University Texas A&M University.

However, his unwavering demands regarding civil rights managed to alienate his Republican colleagues and energize his Democratic enemies. Among his positions were:

Immigration Bill:  State senators adopted a bill to recruit workers from Germany, France, and Great Britain to Texas. Gaines tried and failed to include an amendment to send recruiting agents to Africa as well.

Free School Bill: During the debate of a free school bill, Gaines insisted that schools be integrated, angering Democrats and Republicans alike. When the bill passed without requiring integration, Gaines commented, “If a white man has a right to crawl into a colored woman’s cabin at night and have children by her, that child has a right to sit beside (his sister or brother).”

Voter Intimidation:  In 1870, a Democratic candidate received a certificate of election that was later contested because of fraud, violence, and intimidation. Gaines voted that the winner should vacate his seat, explaining that he was “convinced by affiliates that the poor colored men were kept from the polls by intimidation from the Klu Klux Klan, who threatened colored voters if they voted the Davis-Peterson ticket that they would be expelled from the county.”

As the balance of power in 1871 turned to former Confederate supporters, officials in neighboring Fayette County officials decided to indict Gaines on bigamy charges. The Senator was released on a $1,000 bond ($21,280 in 2022). Gaines managed to delay his trial with constant appeals to move it to federal court so he could receive a fair trial. However, his stalling tactics eventually failed.

He stood trial in 1873, the jury consisting of twelve men; eleven white and one black. The prosecutors pointed out that he had married Fannie Sutton in 1867 and had never divorced; then married Elizabeth Harrison in 1870. The defense put the original minister on the stand who testified that he believed the marriage had been illegally performed. A church bishop had proclaimed in 1869, that weddings by lay pastors were not legal and that ceremonies had to be repeated by an ordained minister. Nevertheless, Gaines was convicted and sentenced to one year of hard labor in the penitentiary. He was held in the Fayette County Jail from July 15 to November 24, 1873.

During this time, however, his popularity among African Americans increased, with many mentioning him as a candidate for governor.

The Texas Supreme Court reversed the finding. Gaines was set free and re-elected to the Senate of the Fourteenth Legislature. The losing candidate appealed on the grounds that Gaines was a convicted felon. The Committee on Election and Privileges removed Gaines from office on March 25, 1874, without allowing Gaines to defend himself.

After losing office, he disappeared into relative obscurity, spending the rest of his life ministering to his congregation and advocating for civil rights.