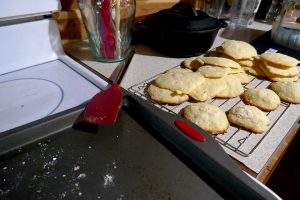 Satisfying your sweet tooth while in self-imposed isolation can be a formidable proposition.  Because my husband has a chronic lung condition, we have opted to limit our contact to the outside world.

We ran out of cookies the other day, so, rather than braving the grocery store, I decided to bake some.  While I used to be a good cook, I haven’t really done much in the way of exercising my culinary chops in almost twenty years.

First, I pulled out a cookbook published in the 1970s by a group of church women in northeast Texas.  Between the ingredients I had on hand and my husband’s dislike of chocolate cake, I decided on sugar cookies.  (In hindsight, I should have pushed for the chocolate dump cake.)

Therefore, I dumped two teaspoons of baking powder into the batter.  Low and behold, the cookies turned into very unsweet cakes, even too unsweet for my husband.

Frankly, I’m too cheap to throw out something I’ve worked hard on.  I managed to make a little icing out of the small amount of powdered sugar I had left, mixing it with milk, butter, and vanilla.  At least, the treats are now edible.

Now, I’ve got to figure out why I can no longer cook a good pot of rice…