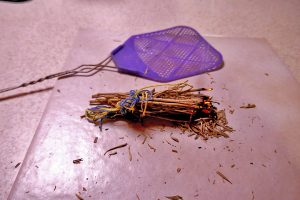 Flymageddon is here!  House flies are besieging us, and we are bravely fighting back.  About two weeks ago, the vermin began to swarm around my automobile.  Despite trying to quickly slip in and keep the pests at bay, they managed to join me on trips to town.  Rolling down the windows and driving like a bat out of hell was the only way to chase them out.

It wasn’t long before the bugs invaded the house.  One was bothering my husband so badly that he agreed I could swat it on his head.  Big Mistake!  I will not repeat his response, especially considering the fact that I totally missed the fly.

Meanwhile, everyone is getting into the act.  My grandsons are getting quite good with the fly swatter, and my daughter even managed to nab one with her hand.  (That tells you how desperate we are to getting.)

I started researching the problem and found this on the internet:

Originally Answered: Why are flies swarming my house?

If bees swarm your house, it’s good luck, but if flies swarm your house it’s the opposite! According to the Bible, Beelzebub is the god of the fly, also known as the god of filth”! Remember how the Pharasees accused Jesus of casting out the demons by the ruler of the demons” in Matthew 12:22–24. Jesus had just healed a man that was possessed by demons, blind and dumb, and the Pharasees could not believe that He did it by the power of God, but instead accused Him of healing the man by the power of the “prince of flies”, beelzabub!

Flies are not associated with anything good ever, and if one sees a lot of them around the house, it becomes a serious cause for concern. All that the flies are thought of or associated with is filth, and they must be gotten rid of immediately!

I remember at some point, one of my family member sought help from me concerning flies. He said he dreamed a swarm of flies at his house and he was worried, and requested that I helped him. I went to his house, and as I lit the white candle in the lounge, flies started falling dead to the floor everywhere around the lounge area. I was also shocked and amazed by what was happening because I had not even started to pray or done anything. We then gathered all the flies and burned them, after which we used Holy water to cleanse the house from the filth of flies. The flies swarming your house might just be a spiritual attack from Satan, which I would advice that you seek help from a powerful priest/saint etc. to cleanse you house to get rid of the swarming flies.

And to think I was only removing the bodies with a paper towel and throwing them in the trash!  Because there is no powerful priest in my county, I did the next best thing.  I grabbed my sage spirit sticks and went to work.  These sticks are used by the Native Americans to cleanse and send out prayers.

So, I lit the sage and waved it around my great room until my husband complained it was too pungent and stunk.  Sadly, no flies fell from the sky.

I guess I’m doomed to a continued spiritual attack from Satan because I just can’t bear to give up martinis in the hopes of living the righteous life.