HITTING ON WOMEN IN CYBERSPACE 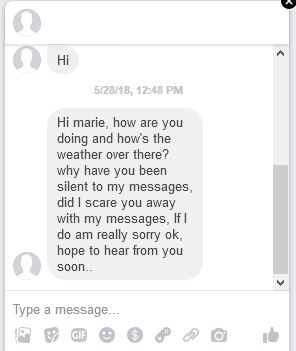 Ladies, thought you were safe from men hitting on you if you stayed out of the bars?  Think again.

I have now had five men hit on me through Facebook.  At my age, I guess I should be flattered, but I found myself more flustered than anything.  My personal Facebook account is by invitation only, and the first time a man I did not know asked to be my friend, I said “yes.”  Boy, did I get a shock; telling me how sexy I was, etc.  You know, the come-on routines.

Couldn’t find his first message to share with you, but here’s the second one.  Needless to say, I deleted him as a friend as quickly as my little fingers could fly over the keyboard.  I’m now better at spotting these guys.

Apparently, practice is widespread.  The website, www.themodernman.com even gives suggestions on how to approach a woman on Facebook:

Some women are bothered.  This activity so prevalent that a Facebook community help forum was devoted to avoiding the behavior.

Other women, however, have taken matters into their own hands.  See how Phaylen Fairchild has handled the situation at https://medium.com/@Phaylen/i-documented-the-men-who-hit-on-me-on-facebook-d1ce47d105ca.