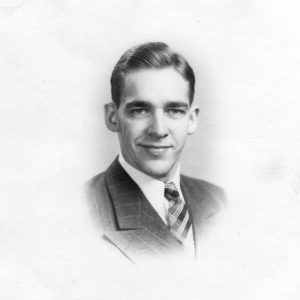 Note:  This blog was first published on Patti Shene’s Over 50 Writer’s Blog on Veteran’s Day, 2020.

This Veteran’s Day I would like to pay tribute to a special veteran in my life, my dad, Second Lieutenant Albert Theodore Watson Senior (October 14, 1923 – December 2, 1997).

Upon high school graduation, he was denied an appointment to the Naval Academy because of kidney issues.  Eventually, he talked his way into the service, pointing out that he had played football in college with no issues.  Still, he had to rely on a friend to take his urine test for admission into Officer Candidate School.

Like most World War II veterans, my dad spoke little of his experiences in the war.  Most of what I know of his service, he left in a “memoir” about his life.  He had led a sheltered existence until he mixed with rough-talking, rough-acting GIs.  In the European Theater, an unexploded grenade outside his fox hole, frozen feet, bombed-out cities, and death must have re-shaped his approach to life.

On the positive side, he saw London and Paris as well as met my mother while stationed at Fort Benning, Georgia.  Additionally, he was able to take advantage of the GI bill and obtained his PhD in Chemistry from Vanderbilt University.

The kidney issues dogged him the rest of his life and, at one point delirious in intensive care, he ranted about the sights and sounds of war he never shared with us, not even in his memoir.  Fortunately, through the Veteran’s Administration, he was able to receive a life-saving kidney transplant in 1972.  He continued to live an adventure-filled life, retiring as the President of Borg-Warner Chemicals, Europe.

What saddens me, however, is I never thought to ask about his feelings and how the experience changed him.  As writers, we need to dig for the hidden story–how ordeals generate emotions, possibly altering the course of someone’s life.  Only by adding this element to works of fiction and nonfiction will our writing become alive.

If you know a living veteran, please help him/her record the full story before it’s too late.