HONORING THE FATHER OF BLACK HISTORY 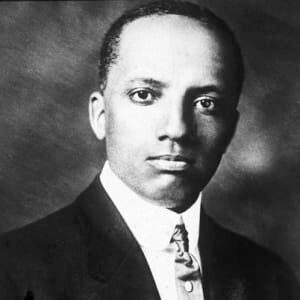 Perseverance was the hallmark of Dr. Carter Godwin Woodson (1875-1950), known as the father of Black History.  Born in Virginia to illiterate former slaves, he spent much of his childhood working on the farm.  Unfortunately, survival took priority over formal learning, leaving no time to regularly attend the five-month school term.  Taking matters into his own hands, he mastered the fundamentals of education on his own.   His plan to enter Douglass High School in Huntington, West Virginia, was delayed while he worked in the coalfields.  At twenty, he graduated with a high school degree in two years.

His schooling did not stop there, however.  Eventually, he obtained his BA in Literature from Berea College, Kentucky, and studied at the Sorbonne in Paris.  After earning his MA from the University of Chicago, he received his doctorate in history from Harvard University in 1912, the second African American to receive a PhD at that institution.

He believed that Black history – which others have worked to delete– was a firm foundation for young African Americans to build on in their quest to become productive citizens.  To that end, he wrote scholarly books and articles on positive African American contributions as well as founded numerous organizations, including one in 1926 devoted to Negro History Week (the precursor of Black History Month).

He dreamed that honoring Black history yearly would eventually become unnecessary.  That would only happen, he declared, when all Americans willingly recognized the contributions of African Americans as a valid and integral part of America’s legacy.

We have much work to do to incorporate the history of all citizens into the fabric of the American story.  In his honor, let us pledge to work toward his goal of inclusion, not only in the past but into the future.