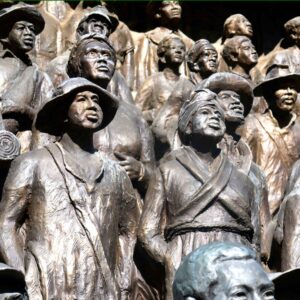 The Juneteenth (June 19, 1865) experience smacked me upside the head this weekend as I participated in numerous Juneteenth celebrations. Take yourself back one hundred fifty-seven years ago to Fayette County, Texas where thirty-three percent of the inhabitants were enslaved African Americans.

This population had been told when then to get up, what to eat, when to work, where to live, who to marry, when to worship—every facet of their lives was controlled by someone else. On top of it all, they were subjected to their owners’ sexual proclivities as well as fear of being sold at any time. Suddenly, they were free. And, to make matters worse, the Civil War had devastated the county’s cotton economy built on slavery; inflation was rampant.

These souls walked into a hostile environment. Their former owners were desperate for labor, signing contracts with former slaves, who, for the most part, had no experience in employment negotiation and most likely were unable to read the contract they signed. Labor was in such short supply that talk of importing African Americans from other states and of luring in white labor abounded.

“The Negroes we have among us—raised among us— have not given satisfaction to their employers, as a general thing. Many of them have deserted the plantations and gone to the villages and cities, where they spend their time in crime and prostitution, miserable to themselves and a nuisance to the community, so unfortunate as to receive an influx of that class. This being the case, it is simply absurd to imagine that Negroes from other states will be an advantage to the country. We say emphatically, discourage such emigration, and if they desire it, let those we have already here, emigrate to the North, to Liberia: or wherever they may see proper to go. We hold no malice toward that unfortunate class; we desire to see them elevated and improved, morally and intellectually, but we are fully convinced that as a producing people, their usefulness has been entirely destroyed.”

The secret of the wealth and prosperity of this county lies in the fact of its containing a large and industrious white population, and we hope our citizens will do everything in their power to encourage and add to this source of future wealth and prosperity. As to the negroes, we have enough of them already, and would gladly exchange them for white laborers and give “boot” largely.

Jim Crow laws, designed to racially segregate the county, thrived until they were struck down in 1964. Although separate but equal was the rule in education, that did not occur in the county. The African American high school made do with worn out football equipment from the white school among other things.

And yet, against all odds, one hundred fifty-seven years later, this county’s supposedly lazy and inept population has managed to produce descendants who are engineers, schoolteachers, lawyers, generals, government officials, nurses, and doctors.

Juneteenth is a testimony to those who pushed on in the face of adversity. Moreover, it is a day to reflect on how holding back others who are different from ourselves has made our country poorer in the long run.

The future generals, engineers, schoolteachers, and nurses exist in every segment of our society. We need to give these individuals the tools, resources, and moral support to be all they can be and then stand back. These upcoming generations will help American live up to its promise as a nation.