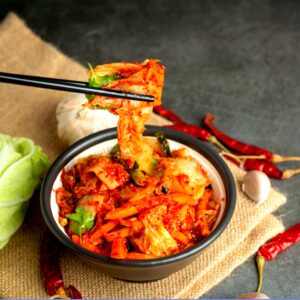 I recently tasted kimchi for the first time.  Awesome!  Scrumptious!  The dish will be on my menu in the future.

For the uninitiated, kimchi is, according to Wikipedia:

… a staple food in Korean cuisine, is a traditional side dish of salted and fermented vegetables, such as napa cabbage and Korean radish, made with a widely varying selection of seasonings, including gochugaru (Korean chili powder), spring onions, garlic, ginger, and jeotgal (salted seafood), etc. It is also used in a variety of soups and stews. It is eaten as a side dish with almost every Korean meal.

There are hundreds of varieties of kimchi made with different vegetables as the main ingredients. Traditionally, winter kimchi, called kimjang, was stored in large earthenware fermentation vessels, called onggi, in the ground to prevent freezing during the winter months and to keep it cool enough to slow down the fermentation process during summer months. The vessels are also kept outdoors in special terraces called jangdokdae. In contemporary times, household kimchi refrigerators are more commonly used.

It is noted for its strong, spicy, flavors and odors, although milder varieties exist. Flavor and odor are intimately connected and non-Koreans often find the smell offensive, but scientists are trying to develop varieties that are not offensive to foreign palates.

Growing up in Baytown, Texas, I was not exposed to any types of Asian foods.  Back then, the area didn’t even have a Chinese restaurant.  (Can you believe it?  Today almost every small town in Texas has one.) However, my father took us to an establishment in Houston called Tokyo Gardens that introduced Texans to Japanese food in the 1960s. We took our shoes off and sat on pillows around on the floor.  Fun!

He also expanded our palates by making the trek to Houston to eat at the Happy Buda Steak House (Japanese), Alfred’s Delicatessen (Jewish), and the French Ari’s Grenouille where we ate snails smothered in hot butter sauce.

The last book of my Warriors for Equal Rights trilogy, Rapture by Revenge, introduces a Korean American character.  During my research, I learned about kimchi.  Then, imagine my surprise when I found a jar of it in the local grocery store in La Grange, Texas.  (Incredibly, the store is now selling sushi which flies off the shelf.)  Well, dang it, I’ve got to have a taste.

Kimchi, where have you been all my life?

Frankly, I’m thankful to have an expanded menu of foods available to me.  My world would be dull without the tastes of Vietnamese, Thai, Korean, and Chinese food.  A life of steak and potatoes just doesn’t cut it anymore.