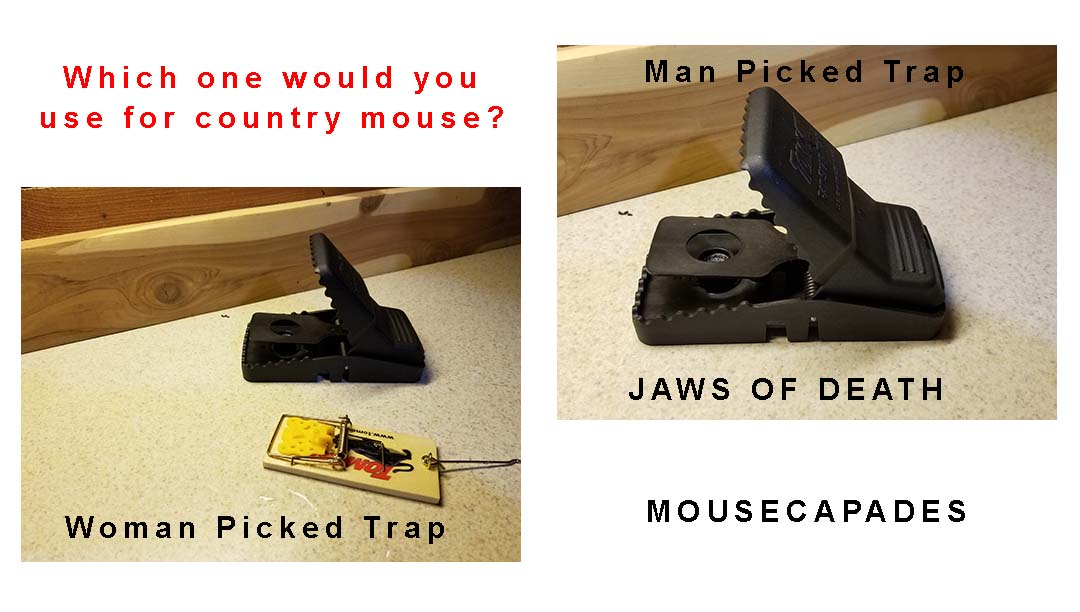 Alas, the mice did not get the message after their comrade was flushed down the toilet that our house was a dangerous place to live.  Soon, we began to find more evidence that the rodents were busy invading our space.  I declared war; removing food from the counters and locking up the trash can.

Again, we found ourselves shopping for traps.  My husband decided we needed a manly-man trap that was designed to catch a rat and would set us back $4.95.  I went for the small ones you see in the cartoons at two for 98¢.

Two intelligent adults can set basic snares, right?  WRONG.  We couldn’t figure out how they worked, but, after a couple popped off while we were holding them, we managed to set them with peanut butter as bait per the manufacturer’s instruction.

Additionally, I warned my husband that, because his trap was so large and the mouse so small, the trap would most likely chop the mouse in two and send blood splattering.  He would have to clean it up, I declared.

I needn’t have worried.  We put so much peanut butter on that the mice managed to lick it off without tripping them!  The other problem was that the traps were on the floor next to the poison that they had been nibbling and stuck out from beneath the kitchen island.  My husband got too close, and one of them snapped.  It was like walking in a minefield.  Finally, in desperation, I narrowed the peanut butter supply to a tiny dollop and fixed the other with cheese.

Success!  I got my first one on the little trap.  Now someone (Guess Who?) had to empty the trap.  As before, my husband declared victory.  I gently reminded him that the last time he uttered those words, more turned up.  For once, he listened.  I set the peanut butter trap again and managed to nail two more mice.

By now, I was confident but left the traps out for another week.  The mice had the last laugh, though.  Here’s a disgusting odor that appears to be coming from beneath the house in my closet…