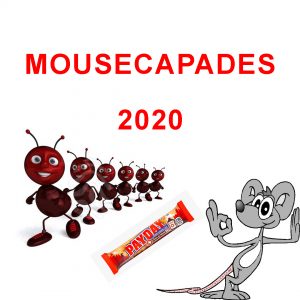 After a blissful year without rodent sightings, my adversary returned.  And, unfortunately, brought some nasty friends with him.

It started several weeks ago when I saw what appeared to be sawdust on the floor outside my pantry door. The surrounding walls are cedar, so I was not terribly alarmed.  Nevertheless, I spent a considerable amount of time attempting to determine its origins.  Clueless, I swept removed it.  The same thing happened days later.

The ‘aha’ moment came when we opened a bag of Lay’s Potato Chips that had been stored in the cupboard.  My husband spotted a long cigar-shaped hole on the side.  (Mind you, I had just taken a bite of chips from the top of the bag.  GAG.)  The enemy was at hand!  Out came the traps, and I settled in for a “Marie aka cat” and mouse game.

The next morning, I eagerly ran to the traps.  But to my horror, the mouse had licked the peanut butter clean.  Instead of a carcass, teeny tiny ants were swarming.  Later while removing my husband’s clothes off the bedroom floor, these unwelcome guests stung me multiple times.

I donned my mask and braved the hardware store on a mission, buying two kinds of ant poison.  After spraying inside and out and adding ant pellets to the house perimeter, I felt safer.  That evening I smeared an extremely thin layer of the beast’s favorite (cheese does not work) on the trap.

My hard work paid off.  I caught a very portly mouse, and his ant friends were nowhere to be seen.  The traps are still active in case one of fatty’s friends decides to venture in.

Honestly, I need to talk to the mouse king here at the ranch.  My visitor’s diet was atrocious.  He fixated on both potato and corn chips, then moved on to my husband’s PAYDAY bar.  Had I not snared him, he would most likely have died of a stroke due to high cholesterol. However, his fatal mistake in choosing dining options was gnawing into the bag under the sink that held poison cubes accumulated from the last pest invasion.

Such is life in the time of COVID.