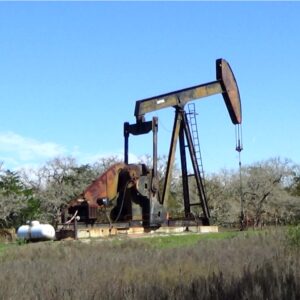 I am no longer a Texas oil baron. My Lone Star State identity has been ripped from me. When I acquired the ranch in 1998, a big-ass ugly oil well occupied the back corner. The profits were nil— enough to buy a happy meal yearly—costing me more in tax accounting fees than the rusted torso brought in. Understand. As long as the oil company pumps something out every sixty days, property owners cannot terminate the lease. I was stuck with it.

Still…. I had bragging rights.

Who could be more Texan than me?

About six years ago, a new company acquired the lease and spoke as if fracking were imminent. At the time, ten miles south of me, new drilling was targeting the Eagle Ford Shale oil deposits. The gentleman inquired about pumping water out of my big tank (pond) earning me a nifty $20,000 on top of large future royalties. I would have liked the money as well as the opportunity to get rid of the trashy yellow catfish inhabiting the water feature. They even painted the oilwell and spruced up the holding tanks.

Nothing came of it.

A month ago, a new owner appeared, telling me they were either going to do something with it or shut it down. Low and behold, about two weeks later I heard all this noise coming from the back and went to investigate. A huge team was there, taking away the rig! 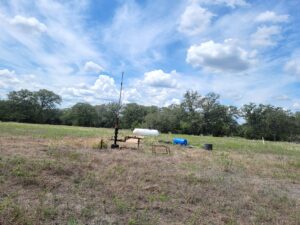 I no longer have bragging rights. My ego is shattered.

My feelings are mixed. The money and bragging rights called. On the other hand, as a climate change believer, I feel oil should go the way of whale oil and coal. Solar and wind are our future.

Thankfully, no longer will the clatter of the pump drift my way on days the north wind blows. Soon, the pasture will be pristine, all evidence of man’s quest for power erased.

Still, I could kick myself. One of my “to do’s” was to take a picture of me in my western garb, complete with my western-style gun belt, pistol, and rifle. It never happened. I thought the thing would be there forever.