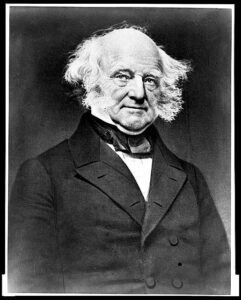 to Oxford Scholarship Online, Martin Van Buren is the number one forgotten president. I know him only because we share the same birthday—December 5. I learned this important piece of trivia through my cherished childhood presidential biography book.

The man does hold some distinctions other than my birthdate:

The man must have been smart. Working at his father’s tavern in Kinderhook, New York, he eavesdropped on conversations regarding politics including those of customers Aaron Burr and Alexander Hamilton. Not able to afford formal higher education, he apprenticed to a lawyer. At age fifteen, he participated in his first court case and won, later opening his own practice.

Then, he turned his sights to politics, rising quickly through the ranks, becoming Andrew Jackson’s vice president.

According to The Miller Center at UVA:

Van Buren wanted to build an effective and efficient political organization principally because he thought it the best mechanism for defending and extending the Jeffersonian and Jacksonian political ideals. These principles—the preeminence of state and local concerns, the wisdom of limiting the power of the federal government, and the importance of protecting Americans from government or public institutions that supposedly threatened their liberty—he held dearly and believed vital to the nation’s political and economic future.

In May1835, Van Buren became the eighth president of the United States. One term and his political career disintegrated. What happened?

The Panic of 1837 with its bankruptcy, unemployment, and food riots began in the first months of his administration. No previous president had dealt with this type of crisis. In response, according to his political philosophy, he proposed the establishment of an independent treasury to handle the federal funds that had been moved to state banks. Additionally, he cut off all federal government expenditures, allowing the government to remain solvent. He soon earned a new nickname, “Martin Van Ruin.” Unfortunately, he was unable to muster enough support to establish an independent treasury during his term.  Then, too, the costly Seminole Wars (1835 to 1842) added to his unpopularity.

The Miller Center at UVA commented:

Should Van Buren have embraced more drastic and activist measures than the independent treasury to try to end the depression? Historians disagree about whether this approach would have worked. The most perceptive scholars, though, point out that such a course would have required Van Buren to jettison his political beliefs, something he was loathe to do. Thus, we are left with a final irony. As a man of the Democratic party, he could not muster its strength. As a man of strong Jeffersonian and Jacksonian principles, he would not choose (and saw no need to choose) another path. Van Buren perhaps paid the final price for these limitations in 1840 when voters chose not to send him back to the White House for another four years.

As we go through life, we develop philosophies and belief systems that guide us on our journey. However, we seem to forget one crucial point: “The only thing that never changes is that everything changes.”

Being willing to examine our belief system in light of new information in our changing world and make adjustments is vital.  And, of equal importance, is accepting that others have changed their viewpoints rather than holding them to ideas they espoused in the distant past.

The key is to read about—and listen to—other points of view and not be afraid to say “I was wrong.”