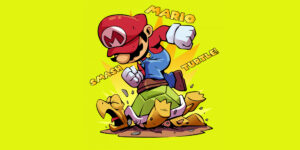 Super Mario Bros. makes a game of smashing evil turtles named Koopa Troopas.   Smashing a turtle (a real one) two days in a row is not fun but upsetting.  Most people believe smashing a turtle to be difficult, but I have managed to do it two days in a row.  We’ve had copious amounts of rain and it is nesting season.  These two factors have sent them scurrying across the highway in record numbers.  At seventy miles an hour, the Beast, my car, is on top of them before I know it.  Swerving isn’t really an option and SPLAT!

WHY NOT SMASHING A TURTLE IS IMPORTANT TO ME

By this time, you probably think I’m crazy to care so much about the creatures.  As it turns out, while growing up, my dad would say “like a herd of turtles in a cloud of dust” as we headed out the door.  I named the ranch in his honor but spiced it up by using the Spanish word for turtles—Las Tortugas.  My turtle logo adorns the sign in front of the ranch as well as tiles in my office bathroom.

The name also seems fitting as our tanks (man made ponds) are full of them.  Then, friends began to bombard me with all sorts of ‘turtle’ gifts—earrings, glass likenesses, shoe wipes, statues–you name it.

TO KEEP FROM SMASHING A TURTLE ,MOVE IT

While researching for this blog, I learned there is a right way and a wrong way to move a turtle off the road.  (Who knew?) Obviously, you need to watch the traffic or you will end up smashed as well.  And, while it seems callous, your life is more important than a turtle’s.

First, determine whether the turtle is safe to pick up.  If it’s a snapping turtle, it is possible to lose a finger if you anger it.  Move it with a blunt object and push from behind.

For the other species, grasp the shell just behind the front legs.  Stay low to the ground to prevent serious injuries in the event you lose your grasp.

Then, put the turtle on the side of the road he was heading towards.  If you don’t, he will simply start back across.  These little suckers are like homing pigeons.  When their mind is made up, there’s no stopping them.

Fortunately, the sun is out, and hopefully, my reptile friends (yes, just looked it up, turtles are NOT amphibians) will not play in the street anymore.  I will sleep better at night.

Check out my other blogs at www.mariewatts.com/blog