I owe my entire career to Ruth Bader Ginsberg.  Without her dogged determination to ensure women’s equality, I would most likely not have held good-paying jobs in the private sector. 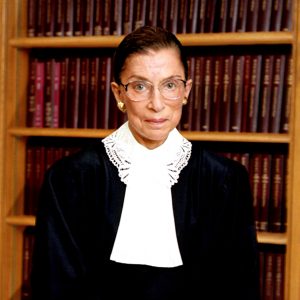 typical of the day.  The New Yorker had this to say:

In 1971, as Richard Nixon prepared to make two appointments to the Supreme Court, he faced a dilemma. Yet another Southerner he’d tapped had been nixed for an opposition to desegregation, so Nixon decided to look for someone who was, preferably, not a racist. He considered naming a woman. “I’m not for women, frankly, in any job,” he told his aides, in a little fit of hysterics. “Thank God we don’t have any in the Cabinet.” He didn’t think women should be educated, or “ever be allowed to vote, even.” But, given the momentum of the women’s-rights movement, he conceded the political necessity of naming a woman to the bench: it might gain him a small but crucial number of votes in the upcoming election. “It’s like the Negro vote,” he said. “It’s a hell of a thing.” Then Chief Justice Warren Burger, in a similar huff, told Nixon that, if he were to nominate a woman, he’d resign. In the end, Nixon named Lewis Powell.

Ruth persevered notwithstanding extreme personal hardship.  She entered Harvard Law School where her husband was a student.  Soon Marty Ginsberg became ill with testicular cancer.  While caring for him and their three-year-old child, she attended his classes as well hers, helping him with his assignments.  He survived.  Then, having graduated at the top of her law class at Columbia, she could not get a job at a law firm or a clerking position. Most people would have given up, but not Ruth.

She did not do it alone, however.  Several men stood behind her, especially her husband.  According to Ruth, she was attracted to him because Marty cared that she had a brain.  His support of her through law school and the fact that they partnered on her first big case (Charles E. Moritz v. Commissioner of Internal Revenue, 469 F.2d 466 (1972)) shows that he thought highly of her brilliant legal mind.  As a tax attorney, he handled the tax implications and she handled the constitutional question of equality under the law.

Another big break came when her mentor, law professor Gerald Gunther, secured her a clerkship in New York.  Gunther promised the hesitant judge he would replace her if she couldn’t do the work.  The judge was still reluctant, however, and it took Gunther’s threat that he would never refer another law student to him to make it happen.  Ruth clerked two years (1959-61) rather than the usual one.

We all need a little help from our friends.  Championing others who are different from ourselves is an excellent way to honor her legacy.