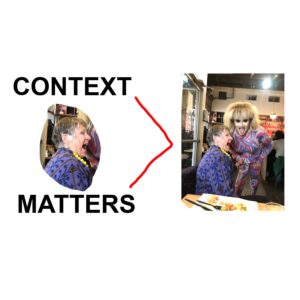 My fear is that, as a society, we are neglecting to look at issues in context. Instead, we turn to simple, pat answers to support our beliefs, preferring not to explore how complex and gray issues are.

In his blog, Alex Dorman  states that data without context can be dangerous. He points out the following:

Limitations Of Data Without Context

I learned this lesson early on in my investigative career.  A man I’ll call Joe claimed he was sexually harassed at work by another male.  He alleged that the man kissed him.  This was true.  However, by looking at the incident in context, I found the situation was not so black and white.  Joe had walked up to the alleged harasser, put his arm around his shoulder, and turned his head towards the man’s cheek making “smooch” noises without physical contact. The other man then actually kissed Joe.

In politics, many blame Joe Biden for inflation.  After all, he is the president, and the buck stops there.  But in context, inflation is a worldwide problem. And, on the other end of the spectrum, cutting fossil fuels and coal immediately sounds wonderful. Let’s save the planet. But guess what? The global economy would collapse. (And I would be sweltering in the Texas heat because we do not have enough alternative energy to keep my lights on and AC running.)

Ignoring Context Can Lead To Ineffective Or Cruel Policy

Mr. Dorman explains this eloquently, so I’ll quote him:

“This reflection is especially important given a long and troubling history of using data with little context to advance ineffective, and at times cruel policy. In just one example of this, Harvard professor and author Dr. Khalil Gibran Muhammad draws our attention to how crime data have been used for over 100 years to “evidence” the criminality of Black Americans. Dr. Muhammad writes, “The hunt for crime data to prove black inferiority started in the 1890s, when demographer Frederick L. Hoffman began looking. Black people had only recently become citizens and therefore subject to criminal prosecution in courts of law. Hoffman mined census reports and the local arrest statistics of half a dozen cities from Chicago to Charleston. He showed that ‘the criminality of the negro exceeds that of any other race of any numerical importance in this country,’ and insisted that the causes had nothing to do with structural inequality. The real problem [according to Hoffman] was a lack of personal responsibility.”[2] This sentiment persists to this day, as does the criminalization of Black Americans through data with no context.

However, we know that the critical context to these crime statistics would include but not be limited to: the history of the Thirteenth Amendment incentivizing the criminalization of Black Americans to continue to steal labor[3]; harsher sentencing practices against Black people[4]; and a history of racist laws and policies from Jim Crow, the War on Drugs, to stop and frisk.

All of this context in part explains why Black Americans have worse outcomes when it comes to the criminal justice system, wholly unrelated to a “lack of personal responsibility.” However, the use of data with no context has become such a rallying cry in some circles, that the Anti-Defamation League has identified a series of numbers supposedly related to crime data as racist propaganda[5]. But not all oversimplifications of data will be as obvious as racist propaganda.”

Analyzing A Situation With Context

Critical thinking skills help you analyze the situation with context.

When you read or hear something, take it with the proverbial grain of salt.  Who made the statement? What was the context surrounding the statement? Does the person have an ax to grind? Are statements backed up with facts? What are their arguments? Read articles from differing viewpoints. Then, evaluate the arguments. Perhaps you may arrive at your own.

Only by thinking critically and contextually can we make the world a better place.