THE GREAT BUTTERFLY INVASION OF 2020 HAS BEGUN 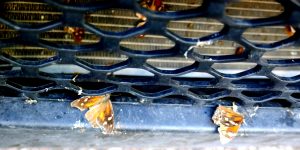 Recently we began to notice small brown somethings resembling windblown leaves swirling through the air.  Since the trees are still green in central Texas, I was quickly able to remove that possibility from the list.  Their speed, unfortunately, made identification difficult.  Finally, I realized the creatures were some sort of butterfly.  Being the astute detective I am, I looked at the grill of my car and was able to capture their essence in still motion.

I’ve lived on the ranch for seventeen years and have never seen anything like it.  Thanks to the internet, I was able to make a positive identification. American Snout Butterflies.  Who knew?

The creature’s name is derived from its “snout-like” nose.  When its wings are closed, it resembles a dead leaf.  Open, the insect is quite pretty and has some resemblance to the Monarch.  Apparently, the very dry August, combined with a wet September, sent the little beings into a feeding frenzy, looking for places to lay their eggs—choice destination the hackberry.

Now, I can add butterfly assault to the list of unwelcome intruders of 2020.

In the interest of staying optimistic about the rest of the year, I must admit that if I had a choice between the butterfly assault and incursion of lovebugs, I will choose the butterflies any time.  For those of you who are unfamiliar with these freaks of nature, they are a species of march fly that mates and then remains together, flying around with two heads.  One year we had a lovebug infestation at the ranch that was so bad they flew into the house and covered our cars with their carcasses.

So, I’ll count my blessings while I still can.  Has anyone spotted the lovebugs this fall?