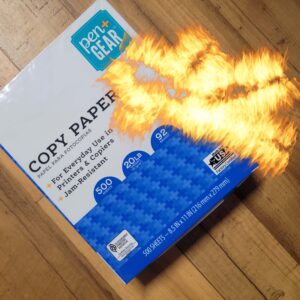 The great paper shortage will get worse before it gets better. As we speak, book publishers are in a panic. Why are we in this mess?

Jack Welsh, CEO of General Electric, began his corporate reign in 1981, ushering in ruthless cost-cutting, focusing solely on quarterly earnings. He did this by sending jobs overseas and firing the lowest ranking employees yearly. Additionally, he made aggressive deals, acquiring other companies. His practices became immensely popular and were adapted by many other corporations.

Problems within the paper mill industry can be traced to these practices. A few North American paper mills closed several years ago, in part, because they could not compete due to aging equipment, rising labor costs, and restrictive environmental regulations. (Sound familiar? The baby formula shortage was triggered by Abbott Laboratories’ failure to spend money on keeping up its facilities despite being extremely profitable. Also, Texas utility companies failed to spend the money necessary to winterize facilities leading to deaths and extensive property damage in the winter, 2021 blackout.)

Then, numerous plants switched to producing board stock in support of the growing packaging industry.  The goal—lucrative profits. Overseas mills filled the gap. Reverting to paper takes approximately six months. And why should they convert back if they are making great profits? During the conversion period they will earn nothing.

Just in Time, known as JIT, also contributed to the crisis.  The concept developed in Japan and became popular in the U.S. in the 1980s. Basically, companies decrease the inventory on hand, relying on suppliers to deliver needed supplies days or hours before it is needed.

And, of course, COVID has ravaged our supply chains, making JIT unworkable. I won’t bore you with these details. If you’ve hunted for toilet paper or hand sanitizer, you know what’s going on.

PAPER SHORTAGE DUE TO LABOR SHORTAGES

With companies treating workers like crap, why should they hang around?  So, we don’t have enough people to work in the mills, cart the paper from plant to warehouse, sort it at the warehouse—on and on and on.

I’m sure some folks will be up in arms, expecting the government to fix everything.  But it’s not the government’s job. Businesses and corporations need to take a deep look at their systems. After years of underperforming stock, GE is being broken up into three separate companies. Welch’s move to sacrifice all for short-term profits did not bode well for the company’s long-term success.

We must resign ourselves to more shortages due to things beyond our control such as COVID and fighting in Ukraine. The paper shortage will eventually ease when the supply of paper increases. Then the price of paper will drop, setting off a downward spiral of prices.  The cycle will repeat itself.

As for me, I will be more than happy to find less junk mail in my mailbox. And, since my reading consists mainly of digital books, I’ll live. And thank goodness I don’t print my manuscripts out on paper to edit them!