THE LIMITS OF FREE SPEECH 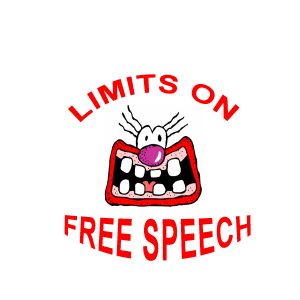 October 19-25 is Free Speech Week.  The First Amendment written in 1791 states “Congress shall make no law respecting an establishment of religion, or prohibiting the free exercise thereof; or abridging the freedom of speech, or of the press; or the right of the people peaceably to assemble, and to petition the Government for a redress of grievances.”

I took the USA Today quiz and found out I didn’t know very much about the first amendment.  You can take it here.  I hope you score better than I did.

Turns out, as a country, we have struggled to define exactly what free speech is.  The system works this way:  people argue over what the First Amendment actually means and then wind up in court. Different decisions are appealed to the Supreme Court, that interprets the First Amendment.  The court has determined that:

Freedom of speech includes the right:

Freedom of speech does not include the right:

Additionally, we do not have the right to plagiarize copyrighted material, defame others (libel and slander), make true threats, or incite illegal actions or solicit others to commit crimes.

A historical look at past definitions of obscenity highlights our struggle to define free speech.  On March 3, 1873, Congress passed An Act for the Suppression of Trade in, and Circulation of, Obscene Literature and Articles of Immoral Use.  This legislation was commonly called the Comstock Act, after its champion Anthony Comstock. The crusader additionally targeted the contraceptive market because he believed that the availability of contraceptives was responsible for encouraging lust and lewdness.

The criminalization of the sale, distribution, or advertisement of materials that could be used for contraception or abortion was included.  Sending information through the postal system or importing it from abroad was forbidden.

Change began in 1914 when birth-control advocate Margaret Sanger fled the country after a federal grand jury indicted her for mailing obscene materials.  She had mailed copies of the Woman Rebel, her monthly publication, containing birth control information.

By the end of 1915, however, public opinion began to evolve.  Support grew for amending the Comstock Act.  Birth control leagues were established in cities across the nation.  Eventually, the charges against Sanger were dismissed.

The takeaway is that we will see new definitions of free speech emerge as our society progresses and attitudes change.