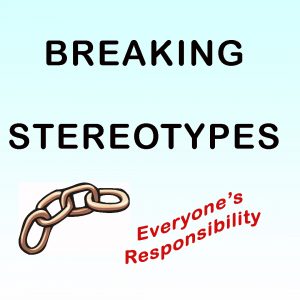 In the 1990s, while working for the Equal Employment Opportunity Commission (EEOC), I had my first contact with a Nigerian.  Before this meeting, my slate was clear.  I had no opinions– good or bad–about individuals from that country.

Working on his failure to hire complaints was a disaster.  He became angry with me because I was not able to prove discrimination.  To me, he was rude and sexist.

Sometime later, a friend and I were working on a management training class for a nonprofit.  I began to complain about Nigerians, and he said, “Nigerians?  Nigerians.  I’ve been to their country.  They are warm, wonderful people.”

Then it hit me—I was stereotyping!  I took everything negative about one individual and piled it on to all who were similar to him.  And my job at the EEOC was to stop others from doing the same thing.

Why is it so easy to stereotype even when we intellectually know better?

Our brain has a built-in function that allows us to generalize.  For instance, this ability is helpful when dealing with a pot of boiling water.  Once we learn that we can be burned by the boiling water, we do not have to relearn this fact every time we see a bubbling pot.  Just imagine how stressful life would be without our capability to generalize.

We can trip up, however, when dealing with people.  Stereotyping keeps us from seeing the individual and all his/her potential.  We often handicap that person with stereotypes, never bothering to look further.

Fast forward to the 2000s.  The day the AT&T store opened in La Grange, Texas, I was one of the first customers through the door.  I was determined to learn all I could about the Galaxy before making the switch from my iPhone.

As I stepped inside, a man I took to be in his 70s approached me with the familiar “May I help you?”

My brain began yelling, “Go away, I don’t want to talk to you.  You don’t know anything about smartphones!  You’re too old.”  I caught myself, thank goodness, and realized I was stereotyping.

Turns out, the man who approached me was an AT&T executive in town for the grand opening.  He quickly turned me over to a younger individual who came from an out-of-town store to help for the day.  I bought the Galaxy and spent some time exploring the features.

Several weeks later, I went back to the store to ask questions.  The out-of-towners were gone, and the regular staff (Millenials and Gen Xs) were there.  I found out I knew more about the Galaxy than they did.  (By the way, I am in my 60s.) Go figure.

The bottom line:  Continual self-policing is necessary to ensure stereotypes are not present while dealing with others.