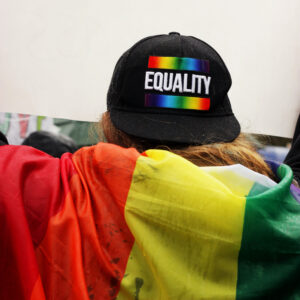 June is Gay Pride Month.  The timeframe was established to commemorate the Stonewall Riots of June 1969, commonly considered the catalyst for the gay rights movement.  Many strides have been made, but one overwhelming hurdle exists.  While other groups enjoy full protection from discrimination via federal civil rights laws, the LGBTQIA+ community is specifically excluded from broad protection.  Currently, this group is not shielded from discrimination in federally funded programs, public spaces, and services.

The solution?  Passage of the Equality Act.  This legislation will give unambiguous anti-discrimination rights for the LGBTQ community in a broad array of areas as enjoyed by others.  However, this legislation is currently stalled in the Senate despite overwhelming support from the public at large and corporate America.

In fact, according to a recent poll by Gallup, eight in 10 or more Americans support hiring gay people for jobs such as salespersons, military, doctors, and elementary school teachers.  Of those polled, 72% said gay people should be considered for the clergy.

Moreover, an estimated 5.6 percent of Americans identify as lesbian, gay, bisexual, transgender, or queer, up 4.5 percent in 2017.

Apparently, concerns over whether this legislation inhibits religious freedom are hampering its passage.

The question before us, then, is exactly what does religious freedom mean?  While having the right to have our own religious beliefs, do we have the right to use those beliefs to discriminate against others who do not share our worldview?

Throughout American history, the religious argument has been made to keep some members of our society from enjoying “the blessings of liberty to ourselves and our Posterity” promised by the Constitution of the United States of America.

Anti-abolitionists cited the story of Noah in Genesis 9:18-27 where Noah curses his son, Ham, father of Caanan, for Ham’s misdeeds and tells Ham:

“Cursed be Canaan!
The lowest of slaves
will he be to his brothers.”

From these verses, the biblical interpretation evolved into what today is known as the “The

Curse of Ham.”  Various writers of Jewish, Christian, and Islamic persuasion contributed to a theory that Ham was the “father” of African peoples, thereby justifying slavery. (See “Abolition in Fayette County” at the link cited.)

A Biblical interpretation was also in play to deny marriage rights for Mildred Jeter, a Negro woman, and Richard Loving, a white man in 1958.  The trial judge declared: “Almighty God created the races white, black, yellow, malay and red, and he placed them on separate continents. And but for the interference with his arrangement there would be no cause for such marriages. The fact that he separated the races shows that he did not intend for the races to mix.”

The decision was eventually overturned by the Supreme Court in Richard Perry LOVING et ux., Appellants, v. COMMONWEALTH OF VIRGINIA on June 12, 1967.

COEXISTENCE OF RELIGIOUS FREEDOM AND THE GAY PRIDE MOVEMENT

To me, both religious freedom and equality for all can coexist.  Does that mean you must embrace the individual’s lifestyle? No.  Must you change your way of thinking?  No.

All we are called to do is treat other individuals with love, dignity, and respect.  This goes along with the following biblical teachings:

So whatever you wish that others would do to you, do also to them, for this is the Law and the Prophets.

Together, with love, patience, and tolerance we can move this country closer to the ideals set forth by our founding fathers.

Photo by Elyssa Fahndrich on Unsplash.

Sign up at www.mariewatts.com to receive future Stories About Life delivered to your email address or read more stories by clicking here.