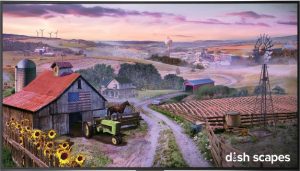 I thought jigsaw puzzles and sudoku on the internet were my ultimate timewasters during COVID.  But I was wrong. The absolute number one is dish scapes (channel 199). Several days ago, I returned to the house from my office next door. I stepped into a cacophony of barking dogs, crickets, pigs grunting, car noises, and a creaking windmill.

Puzzled, I looked at the TV screen only to see a rural scene entitled Heartland Dish scape. In the animated setting, a barn and tractor sit next to a country road leading to a small town in the distance. The scene moves slowly in Heartland, as surely as in nature–the sun rises, the sun sets. The rhythm of life. The lights in the farmhouse go off and on. Fireflies light the sky, and a Ferris wheel at the town’s carnival lights up as darkness approaches, complete with carnival music.

I immediately tuned in upon returning to the office. What would happen next? Look carefully. You don’t want to miss the occasional pickup truck going down the road or the crop duster making a pass in the distance. And, just to ruin the rustic setting, four wind turbines churn lazily on distant hills. And yes, come morning, the rooster leaves the comfort of the barn to crow.

While the scene is clever, I’m still upset about the horse. Confined by a fence around the barn, the unfortunate equine is wearing a bridle and saddle no less. And it never comes off. Poor horse!  He whinnies, I suspect, to complain about his plight. The pig’s predicament is no less troubling. While he moves and grunts, he’s never allowed to wallow in the mud.

According to DISH, scapes is a relaxing channel with ambient noise that can be watched or enjoyed in the background while you are doing something else. The offerings are designed to match the channel’s monthly special offerings.

While exploring scapes, I found a sweepstake for a road trip to the Heartland. Entering was a priority. Now, I hadn’t entered a contest since the 1980s when I used to enter the Publisher’s Clearing House Sweepstakes. I never bought a subscription and must have spent at least thirty minutes per entry figuring out how not to be tricked into an order of a magazine I didn’t want.

And, of course, I never won. But, hey, who knows? My luck might change.

Can’t wait for the August scape and more sweepstakes. At least it’s a change of pace.

How are you wasting your time?