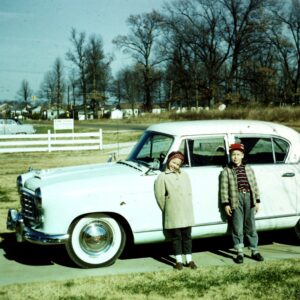 Today, most of us agree that seat belts save lives and accept regulations mandating their use.  But that wasn’t always the case.  The fight for seat belt acceptance sounds eerily similar to today’s struggle for vaccine compliance.

The first seat belt was patented in 1885 to keep tourists from falling out of New York taxi cabs.  While the device had been around for years on streetcars, few people used them.  Finally, Nash Motors became the first company to offer seatbelts in 1949.  Ford followed suit offering them as an option in 1956.  However, only two percent of Ford buyers took advantage of it.

Vehicular fatalities skyrocketed as cars became increasingly popular in the twentieth century. Between 1920 and 1960, the rate of auto deaths doubled.  This figure does not include those injured, permanently disabled, or the cost of property damage.

By the 1950s, crash testing at universities identified the causes and effects of bodily impact inside a car during a collision.  The results led to the decision to “package” the driver and passengers with seat belts and padded dashboards.

The situation was so dire, that, in 1959, American politician Daniel Patrick Moynihan described the situation as “the epidemic on the highways.”  He urged the public to view it as a public-health problem.  The government, he contended, should collect statistics and action should be taken by the government, auto manufacturers, drivers, and passengers to reduce the carnage.

States began to take notice.  In 1961, Wisconsin became the first state to require seatbelts in the front seats of cars in all models built in and after 1962.

However, it took the 1965 publication of the muckraking book Unsafe at Any Speed: The Designed-In Dangers of the American Automobile by Ralph Nader to shake the public awake.  It led to the passage of the National Traffic and Motor Vehicle Safety Act of 1966, seat-belt laws in 49 states (all but New Hampshire), and a number of other road-safety initiatives. By 1968, seat belts, padded dashboards, and other safety features were mandatory equipment.

But having them in vehicles did not mean they were worn. The anti-belters had the following arguments.  Seat belts:

In fact, by the early 1980s, only fourteen percent of U.S. drivers regularly used them.  New York was the first to take action by requiring the use of seat belts by law in 1984.  Other states followed.  By 1995, every state but New Hampshire required vehicle occupants to buckle up.

Despite public campaigns and the fact that seat belts alone were credited with saving over 329,000 lives between 1960 and 2012, national seat belt use was only at 90.7% by 2019.  Almost half of the people killed in 2017 motor vehicle crashes were not wearing seat belts.

Picture:  My brother and I with our circa 1950s used Nash Rambler with the naked woman hood ornament.