WAS RACCOON ON YOUR THANKSGIVING TABLE? 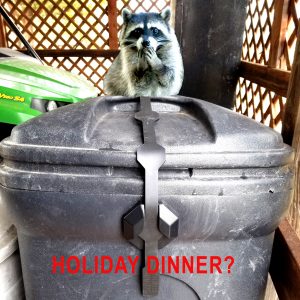 I was astonished to learn that raccoon had been a traditional Thanksgiving meal in our country.  Eating the mammal began with the Native Americans and early settlers.  Those moving west, as well as the poor survived on it.  For slaves, the animal was a godsend.  Few had sufficient diets and supplemented their nourishment with the protein-filled creature.

In fact, raccoon was so popular that Mark Twain mentioned it as one of the foods he missed while traveling in Europe in the 1870s.  By the early 1900s, the meat was so prevalent it sold in city game markets and served in many urban restaurants.  My 1967 copy of the iconic cookbook, Joy Of Cooking, contains a recipe along with suggestions for a bread stuffing.

Raccoons rate just behind the mice as the bane of my existence.  I’ve complained about them online before.  Recently, the creatures learned how to open my trash can; it only took them ten years to figure it out.  I thought about using a bungee cord, but figured the rascals would eat through it in a flash.

Tired of picking up garbage, I asked my husband, super internet shopper, to find a coon-proof can.  Being thrifty, I was not about to pay $235 for a device that also repelled bears.  He settled on a nifty strap for under $20 that has kept the pests at bay.  They tried to eat the can, but were unsuccessful.

So, imagine my horror when I discovered I had wasted money on stuffed Cornish game hens rather than harvesting the bounty of the land.  I could have had a traditional Thanksgiving befitting my ancestors, thinned the raccoon population, learned a new skill (skinning an animal), and saved cash.

OK, time to practice my shooting.  Hmm.  I think my .223 varmint rifle may be a bit too much and blow the critter to smithereens.  What I really need is a .22 rifle (hint, hint, Santa).  I would like to make my husband a coonskin hat for Christmas, and don’t want to put holes in the pelts with my 20-gauge shotgun.

Who wants to make Christmas reservations at my house?  I promise a feast!