WHEN GOOD INTENTIONS BACKFIRE: THE STORY OF ANNA MARIE JARVIS 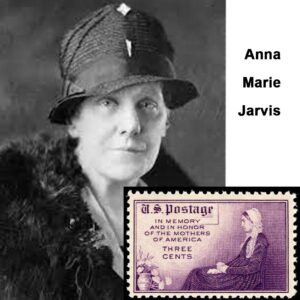 Anna Marie Jarvis spent decades trying to undo the monster she created:  Mother’s Day. To her horror, the day she envisioned was highjacked by the moneymakers and turned into a commercial venture.  The National Retail Federation estimates the average family will have spent $245 on Mother’s Day this year, including gifts and dinner.

Anna Marie Jarvis was born to Granville E. and Ann Reeves Jarvis on May 1, 1864, Her mother was a dynamic woman, having given birth to thirteen children, only four of whom lived to adulthood.  Her losses no doubt propelled her to start a Mother’s Day Work Club in her Grafton, West Virginia community during her sixth pregnancy in 1858. This activist group educated families to reduce disease and infant mortality, raised money to buy medicine, and hired women to work in families where the mother suffered from health problems. She was also extremely active in her church.

Anna took advantage of her mother’s encouragement and inspiration. In 1883, she received a diploma for the completion of two years of course work at the Augusta Female Seminary in Staunton, Virginia, today known as Mary Baldwin University.

Afterwards, Anna briefly returned to Grafton, working in the public school system, and staying active in the church with her mother. Later she spent a year working as a bank teller in Tennessee before to Philadelphia, Pennsylvania, to live with her brother. There she became Fidelity Mutual Life Insurance Company’s first female literary and advertising editor. Additionally, she became a shareholder in her brother’s Quaker City Cab Company. Despite the distance, Anna and her mother maintained a close relationship through correspondence.  In failing health, her mother moved in with her children and passed away May 9, 1905.

Anna was determined to honor her mother. Because she often heard her say that she hoped someone would establish a memorial for all mothers, living and dead, Anna set about doing just that. The first Mother’s Day was celebrated in the Andrews Methodist Church in Grafton three years later on the second Sunday in May because that date was close to her mother’s date of death. White carnations, her mother’s favorite flower, were passed out.

Anna gained financial backing and waged a tireless letter-writing campaign.  She created the Mother’s Day International Association and trademarked the phrases “second Sunday in May” and “Mother’s Day.” She felt mother should be singular so each family would honor its one and only mother.

The popularity of the day mushroomed. Her tenacity was rewarded in 1914 when President Woodrow Wilson signed a measure officially establishing the second Sunday in May as Mother’s Day.

ANNA MARIE JARVIS   THE FIGHT TO DECOMMERCIALIZE THE DAY

By 1915, however, Anna began to have doubts as she watched what she had intended to be a private acknowledgement of all a mother has done for you turned into a profit machine and as a reason for groups to make political statements.

Between 1915 and 1935, Anna had various skirmishes with those she perceived as high jacking the day. She attacked the florists through the media when the price of carnations skyrocketed before Mother’s Day and urged others to boycott the price gougers.

In 1923, she threatened to sue the New York Mother’s Day Committee whose prominent members were politicians over their plans for a large Mother’s Day celebration.  The event was canceled.

After crashing the Philadelphia convention of American War Mothers in 1925 because they had their own Mother’s Day commemoration using white carnations, Anna was charged with disorderly conduct. The charges were later dismissed. The group got their revenge, however, by successfully lobbying President Franklin D. Roosevelt to unveil a Mother’s Day stamp. The stamp contained a portrait of painter James McNeill Whistler’s mother with white carnations and the words, “In memory and in honor of the Mothers of America.”

By the 1940s, Anna had become jaded and disillusioned, wishing she’d never started the holiday. In 1944, she was admitted to a mental asylum, where she died alone and destitute in 1948. Childless, Anna Marie Jarvis never made a profit on her creation.

My heart aches for the woman, and I believe she has a point. The day should not be commercialized. Don’t get me wrong, I love to be honored and am always happy with gifts! (Who isn’t?)  But I don’t feel the need for the celebration because I’m fortunate to have children who appreciate me and tell me so throughout the year.  Isn’t that what every mother really wants?

P.S. to daughters Kristin and Karen:  Don’t think this means you can stop calling or sending cards and gifts on Mother’s Day!