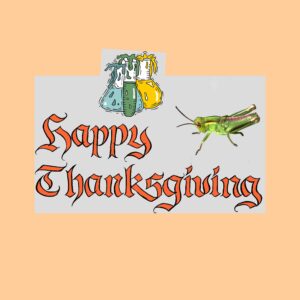 After having stuffed my face and imbibing too many Manhattans, I began to wonder if global warming would change the way my descendants celebrate Thanksgiving.

The last few weeks have been filled with news about Lake Powell and Lake Mead running out of water and towns such as Rio Verde, Arizona going completely dry.  Farmers won’t have water to grow crops. Raising poultry takes water, too.  No turkey? No dressing?

I can just envision dinner in fifty years. Tequila will replace wine and other water-intensive alcohol ingredients such as corn, wheat, potatoes, and rye since the blue agave can be grown in the desert. Besides, it provides a source of fiber, alternative sweetener, and mezcal. Will the agave or other cacti replace green beans? The main course will be a variety of insects as well as drought tolerant grains such as chick peas and black eyed peas. We’ll be baking with Sorghum  and millet flour.

What? Insects you say?  Yep. It’s already happening around the world. Sylvain Hugel, one of the world’s foremost experts on crickets of the Indian Ocean Islands ads cricket powder to his morning yogurt, sprinkles larvae over his salads like bacon bits, and fries up frozen crickets for dinner. In his view, moving to insect consumption may be the only way to save the world.

According to the United Nation’s Food and Agriculture Organization:

So, you can’t imagine a giant grasshopper on the platter being sliced up with a carving knife. Never fear. Science is here to help.

Ta-da! Let me introduce you to lab-grown meats. This meat is made by cultivating animal cells in vitro. The meat is produced in a controlled environment, making it free from bacteria and disease. Additionally, fewer real cattle will help reduce methane, which contributes to global warming.

In fact, Upsides Foods just received safety clearance from US Food and Drug Administration to begin production of lab-grown chicken once its facilities have been inspected by  the US Department of Agriculture. Lab-grown meat is already available in Singapore.

Still, when I think of a hunk of lab-grown turkey, I see a big blob of meat with no bones! Just think, my descendants will not know the joy of tugging on the wishbone and the delight when you had the “lucky” break (the big piece), allowing you a secret wish. What will replace the turkey leg at fairs? Will it look like an oversized corndog on a plastic stick?

Its time to record family remembrances of Thanksgiving before its too late. The youth of tomorrow will be oblivious of our quaint practices while living the carnivore life using real animals.