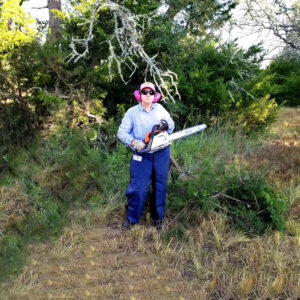 I hate it when men think I am an inept woman.  Just so we are on the same page, I’ve included the definition of the word:

2: lacking in fitness or aptitude : UNFIT inept at sports

3: not suitable to the time, place, or occasion: inappropriate often to an absurd degree an inept metaphor

It’s not that they say it to my face, it’s the way they act.  A number of these incidents stand out in my life.

The past week, I have been using a chain saw to clear brush.  Because of a disability, my husband is unable to wield the machinery.  In the middle of a nasty tangle of scrubby cedar, downed oak branches, and vines with stickers, the contraption malfunctioned.

While I do know some things about the chain saw and am not a totally inept woman in its presence, I am certainly no expert.  I can start it, fill it with fuel, add chain bar oil, and punch the trigger to make it go.  Getting the chain back on when it comes off, is a new skill for me, but I’m working on it.

I brought it back to my husband, who messed with it and did his fair share of fussing at me for the way I handled it while cutting.  Then, he determined that it was broken because he could not get the chain to move while the saw was off.  (Note:  If the chain is on properly, you can rotate it around the center bar.)

So, I took it to the local dealer.  The older man at the counter asked what the issue was.  I told him the chain would not rotate.  He grabbed the saw and opened it, checking to see whether the chain was on correctly.  Still, it did not rotate, and he seemed a bit surprised.  Then, he noticed that the safety lock handle (chainbreak system) was on safety.  Once he pulled the handle into operating position, the chain rotated freely.  I thanked him profusely, not telling him that the inept man helping me had not noticed this either.

I am certain that, had I been male, he would have written up a ticket immediately and put it in the shop, not bothering to check further.

So, for once, being viewed as an inept woman paid off!

HAVE YOU EVER BEEN VIEWED AS AN INEPT WOMAN?

Please, share your experiences.  And men, have you entered a woman’s domain and had the same thing happen?  Please let me know.