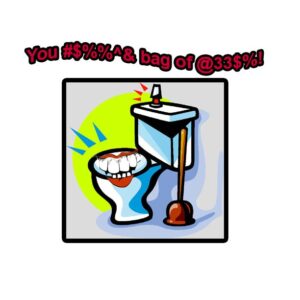 My potty mouth may not be such a terrible trait after all.  I imagine you are saying right now, “Marie, do you have a potty mouth? I can’t believe such a mild looking grandmother could let out a string of expletives.”

My answer is, yes, unfortunately I do. Yeah, Yeah, I know that polite southern women aren’t supposed to do this—if you don’t have something nice to say, don’t say anything.

According to Anne Dingas of Texas Monthly, profanity is an old Texas tradition. Famous Texans, including Lyndon B. Johnson, were known to be proficient in its use. Neiman Marcus chef and tastemaker Helen Corbitt stated, “I learned to swear in Texas.”

I discovered most of my vast collection of obscenities while working for the federal government, investigating employment discrimination complaints. If it has been uttered in the Houston area, I have heard it.

According to Dr. Grace Tworek, PsyD, of the Cleveland Clinic, research has indicated that people who generate more curse words also generate more regular words, leading to a larger vocabulary. Is this a sign that cursing improves intelligence? Unfortunately, just because the two run together (correlation) does not equal causation; you can’t prove one causes the other.

Scientists have also found correlations between cursing and:

And Twain was right. In 2009, a group of study participants submitted to an experiment dipping a hand in cold water. Half of the participants repeated a curse word, while the other half repeated a neutral word. That study found that the potty-mouthed participants kept their hands in the water longer — and perceived the test as less painful overall. Some tests tried neutral words instead of curse words.  The result?  The pain wasn’t reduced.

WARNING: Those who curse constantly don’t get as big a bang for their buck as those who open their potty mouth in moderation.

Our tendency is to judge a person by first impression—how they look, how they speak, the color of their skin, the size of their bodies, you name it.  We process this information and assign a grade. After the assessment, its hard to change our mind.

But we need to live by the mantra “Don’t judge a book by its cover.” Taking time to know what is inside someone is what counts. It’s hard work, but worth the effort.