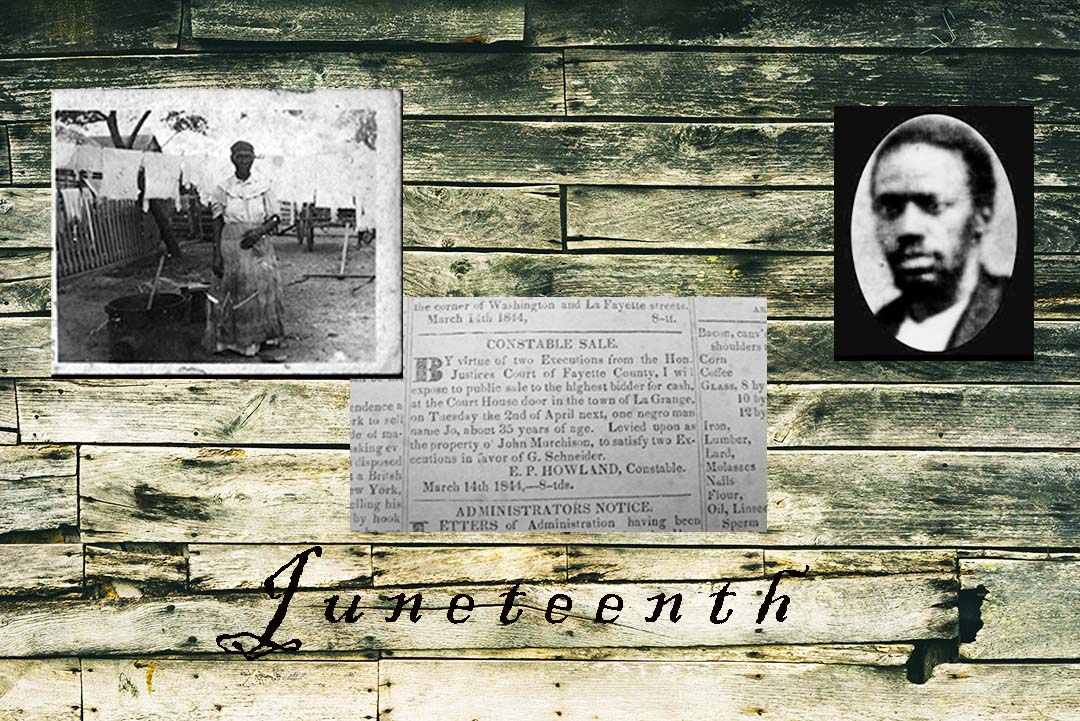 Pre-Civil War Fayette County, Texas counted on slave labor to assist with the production of corn, tobacco, wool, and cotton.  The region was home to 3,786 slaves out of a total population of 11,604.  These slaves had the legal status of personal property; they were subjected to being bought and sold, hired out, and mortgaged.  No rights to marry, have a family, own property, or free themselves existed.  The law provided that slaves be treated “humanely”, and that punishment could not include the taking of life or limb.  However, because these African-Americans could not testify against whites in court, their right to a trial by jury and court-appointed attorney when charged with crimes more significant than petty theft was a farce.

Because the economy was so dependent on human chattel, abolition, the elimination of slavery, was not looked upon favorably by many of the residents, except for a few in the German community.

The True Issue of La Grange ran an article about a “Negro Thief”  in February 1856.  A.B. Chamberlain was arrested for trying to escape with a slave belonging to William Knox of Burleson County.  The thief claimed to be an abolitionist and intended to free the slave after hiring him out for a time or selling and stealing him again to raise money to get the man to a free state.  With satisfaction, the paper commented that Mr. Chamberlain would most likely be rewarded free “board and lodging in comfortable apartments furnished at Huntsville.” (Texas state prison)

By 1858, however, the tone had changed, and Fayette County was swept up in the hysteria throughout Texas regarding the presence of abolitionists.  The True Issue newspaper editorial by M.Y.C. lamented the fact that the spirit of fanaticism was sweeping the nation as evidenced by “incendiary appeals and abolition petitions.”

“Under the pretense of ameliorating the condition of the Southern slave, they are willing to subject twenty-five millions of freemen to all the horrors of War.

In the name of equality they would strike down the barrier which God has erected between the races—in the name of humanity they liberate our slaves to wear the name of freemen (sic) upon a heavier chain—in the name of liberty, they would reduce to ashes the glorious temple erected by our Revolutionary Sires and dedicated to Human Liberty.”

The author then urged that readers must “maintain the rights guaranteed by the constitution; the right of the people to decide for themselves all questions of a local character, or we will find that the days of our Republic are numbered and chronicled upon the page of history as things ‘that were but are not’.”

Both abolitionists and slaveholders, in fact, used the Bible in order to further their own cause.  Anti-abolitionists cit the story of Noah in Genesis 9:18-27 where Noah curses his son, Ham, father of Caanan, for Ham’s misdeeds and tells Ham:

“Cursed be Canaan!
The lowest of slaves
will he be to his brothers.”

From these verses, the biblical interpretation evolved into what today is known as the “The Curse of Ham.”  Various writers of Jewish, Christian, and Islamic persuasion contributed to a theory that Ham was the “father” of African peoples, thereby justifying slavery.

Ultimately the notion of abolition was settled, not through public discourse, but through war. Slavery in Texas formally ended on June 19, 1865, when Union General Gordon Granger read General Order No. 3 to the public in Galveston, Texas, announcing that, “in accordance with a Proclamation from the Executive of the United States, all slaves are free.”  Freedmen began to celebrate liberation day in Fayette County as early as1870.  The tradition continues and is known as Juneteenth.