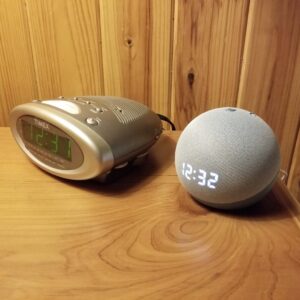 I bought my first new alarm clock in twenty-something years this week. The retired gadget (Timex Nature Sounds Radio Clock) was state of the art back then, putting you to sleep with babbling brook, forest, or ocean while waking you with a cathedral chime, mechanical bell, or the radio. The numbers were digital, producing that eerie green glow. And yes, a snooze button was available. The radio, if set properly, would run for fifty-nine or fewer minutes and turn off automatically.

I purchased that type for a specific reason—electronic buzzers scared the bejeebers out of me as a teen. After my mother stopped waking me for school, an electronic buzzer was employed. The confounded blast would send me ten feet off my bed. I was so relieved to get a clock with a radio that would gently lift me from slumber, it wasn’t even funny. (Remember the clocks with the flipping numbers from the sixties to seventies?)

Before the mechanical age, folks used to sleep facing the east so the natural sunlight would raise them into consciousness. Then too, most lived on a farm so the crowing roosters and bellowing cows who needed milking would set up a racket. I witnessed the rooster method as a child when visiting my grandparents’ farm in Tennessee.

In the 1800s in Britain, industrial workers used knocker-uppers to get to the job on time. The knocker-upper would tap on windows with a long pole, rapidly moving from dwelling to dwelling. Peashooters were also utilized. This tradition continued until the 1970s.

And, of course, you ask, who woke the knocker-uppers? The tongue-twister goes:

So our knocker-up didn’t knock us up

Apparently, those who worked the night shift were night owls, preferring to sleep during the day.

My new alarm clock is actually an Amazon Echo Dot 4th Gen (with the time visible) in twilight blue. It does more than my old machine ever did, such as play “Who Let the Dogs Out” to rouse you in the morning. (I did this once—and only once— to my husband with Alexa.   He cursed.) It will also set itself automatically when the time changes as well as play all types of relaxing music.  Admittedly, I’ve been using an Echo Dot 1st Gen as an alarm for the past several years but tired of having it, as well as the clock, on my nightstand. (I dared not ask Alexa the time at night for fear that more choice words might emanate from my husband.)

ALARM CLOCK OF THE FUTURE

The sun attribute is not for me. I’m retired and rise early enough anyway. Working for myself means I can get up when I want.  Only a handful of times a month do we need the alarm function.

I had planned to toss the old one in the trash since it has some broken plastic but realized they are selling on eBay for $17.99. Anyone who wants to make me an offer can e-mail me at tribe@mariewatts.com.