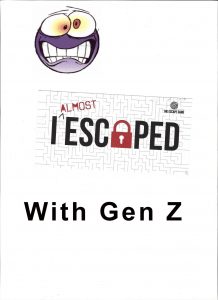 I recently took my 13-year-old grandson to an Escape Room for his birthday, my husband and daughter in tow.  This one had a classroom theme, and, to go the kickball game, you had to do all your homework.  Only then could escape before the hour expired.

Honestly, my heart sank when I realized that five female high schoolers were joining us.  In addition to my grandson, that made six Gen Z’s.

New to Gen Z?  This most recent generation was born between 1995 and 2015.  Unlike Millennials, they grew up with smartphones and readily accessible Wi-Fi.  The Z’s are predicted to be a pragmatic generation that is diligent, collaborative, and eager to build a better world.

The game began, and even though I think I’m smart, I quickly realized all the Gen Z’s were leaving me in the dust.  Must have been that their years of playing video games helped them figure out the puzzles with lightning speed.  And, surprisingly, I found them all respectful, polite, and sharp.

In the end, we didn’t quite make it out on time, but I have a new-found respect for this generation.  I feel confident that Gen Z will save us from the mess we’ve made.