CHANGE OBLITERATES MY PAST 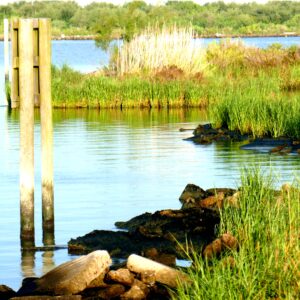 The reality of change hit me especially hard on August 31, 2022, while viewing the Battleship Texas moving from its’ berth at the San Jacinto Monument to Galveston, Texas for repairs.

The location we chose for the event was the Baytown Nature Center, a 500-acre peninsula surrounded by Burnet, Crystal, and Scott Bays. It consists of hardwood uplands, high quality tidal marsh, and freshwater wetlands. This unique site is listed on the Great Texas Coastal Birding Trail, providing habitat for 317 species of resident and neo-tropical migrant birds. The American Bird Conservancy designated it as a nationally important bird area. The nature center hosts a monthly Audubon Bird Survey in partnership with Houston Audubon.

I grew up down the road from this park, waterskiing in Burnet Bay. However, it was a subdivision called Brownwood composed of 448 middle-to-upper-middle class homes nestled in a wooded area. Executives from Humble Oil and Refining Company (now Exxon) designed the exclusive neighborhood in 1937 for their families. I remember my parents taking us to their friend’s house for dinner, a gorgeous home overlooking Crystal Bay. While the adults visited, my brother and I chased fireflies on their spacious lawn.

Hurricane Carla changed everything in 1961. During the storm, my family huddled inside, along with the pastor and his wife; the parsonage having a large tree in danger of falling on the structure. The savage storm disappeared, only to be replaced with relentless sunshine and oppressive heat. School was canceled for days.

My subdivision was relatively unscathed. Brownwood, which I could reach by riding my bicycle, was not. The national Guard protected the entrance, only allowing residents to enter. Most of the houses were inundated with massive amounts of salt water, leaving rings of oily grime to document their highest level.

Families brought their clothing and other belongings to our church, where members, my mother included, took them home, laundered and cleaned, then returned them to their rightful owners. (Oh, and by the way, that church is completely gone, lock, stock, and barrel. It’s now a vacant lot with lovely green grass.)

But it wasn’t just the hurricane. Turns out Exxon and surrounding industries, as well as growing municipalities, were pumping copious amounts of underground water, causing the neighborhood to sink. By 1983, the subdivision had sunk about ten feet and Hurricane Alicia polished off the neighborhood. FEMA and local authorities began buyouts. As expected, some held out, not wanting to move from their homes. Eventually, the resisters wore out, man helping nature reclaim the area.

You can still find traces of civilization if you hunt in the dep recesses of the park, but I was shocked at the literal lack of its visibility. A quick peek at archive pictures from the Houston Chronicle gives you the scope of the change. These interesting nature Reclamation pictures are worth viewing.

OK, subdivision gone. Then, the Battleship Texas. The ship has been docked by the San Jacinto Monument since 1948. As a kid, we visited numerous times. The ship will not return to this location, making the picture I took of the ship and monument more poignant. The two will never be captured together again.

And my school—Baytown Junior High, home of the fighting Red Goslings, burned up in 1979 (arson). Only the gym remains. Today what’s left of the gym, is behind a fence, the junior high having been rebuilt on the same land as my elementary school in the old neighborhood. Exxon has appropriated the land. Rumor has it that the old building is used for storage.

I know things change, but dang it, too much change in one day, is stressful. Right now, I need a constant in my life. So, I’m going to reminisce about the past while I sip a dirty gin martini, extra olives, and hope to hell that gin never disappears.

Have constants in your life disappeared recently? Let me know.