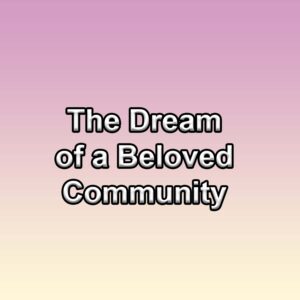 In the spring of 1963, civil rights activists in Birmingham, Alabama led by Dr. Martin Luther King launched a campaign against segregation.  They used a variety of nonviolent tactics including lunch counter and library sit-ins, marches on city hall, and boycotts of downtown merchants.

Alarmed, the city government obtained a state injunction against protests.  However, the activists decided to disobey.  King was arrested.

While incarcerated, he penned what is now known as the “Letter from a Birmingham Jail”.  In this work, he introduced the notion of “beloved community”.  The goal was to transform people and relationships, creating communities grounded in reconciliation, friendship, and human dignity.

In the beloved community, poverty, hunger and homelessness are not tolerated. All forms of discrimination, bigotry and prejudice has been replaced with an all-inclusive spirit of sisterhood and brotherhood. International disputes are resolved by peaceful conflict-resolution and reconciliation instead of military power. Love and trust triumphs over fear and hatred. Peace with justice prevails over war and military conflict.

In fact, his vision fits with directives given by the world’s religions.  They are:

While we’ve made progress, there’s still a long way to go.  I’m asking that we join together to make the beloved community a reality.

The first step is to commit on a personal level.

On the institutional level, we need to support change aimed at assuring all leadership is valued and expressed.   Make it a mission to elect and appoint leaders who understand that everyone benefits when the principles of a beloved community are practiced.  If you are a leader, examine your daily actions.  Do you work towards a beloved community?

Change is difficult.   Tension, misunderstanding, conflict, or confrontation will occur.  However, we cannot afford to value order over social justice.  We must push for what Dr. King called a positive peace which is the presence of justice.

How do we do this?  By continuing respectful dialog and nonviolent protest until justice is obtained.

In closing, I’d like to give thanks to Dr. King and countless others who continue to refuse to settle for anything less than equality and justice for all.  Their persistence has made a positive difference in my life.

This is the text of the speech I gave at the La Grange, Texas Martin Luther King Jr. Celebration on January 17, 2022.