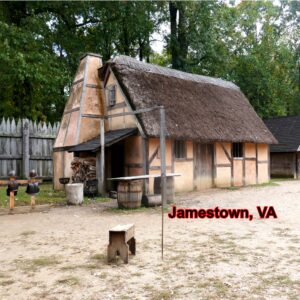 Follow the money was a theme on my recent trip to Williamsburg, VA.

Make no mistake, Jamestown was founded with making money in mind. In June of 1606, King James I granted a charter to a group of London entrepreneurs, the Virginia Company, to establish an English settlement in the Chesapeake region of North America. In December of that year, 104 settlers sailed from London with Company instructions to build a secure settlement, find gold, and seek a water route to the Pacific. (Ka-ching!)

When the Europeans arrived on American shores, an estimated 5 million to 15 million Indigenous people lived in North America. The settlers were hungry for Indian land. Many had been barred from inheriting property in Europe and, besides, the land’s natural resources provided a significant way to make money. The differences in world views and spiritual beliefs allowed the Europeans to justify fueling racial hatred and paranoia—Indigenous peoples were pagan savages who must be eliminated in the name of civilization and Christianity. The U.S. government authorized over 1,500 wars, attacks, and raids on Indians. By the late 19th century, fewer than 238,000 Indigenous people remained and the newcomers were free to rake in the cash. (Ka-ching!)

Thomas Jefferson wrote that “all men are created equal” in the Declaration of Independence.  Calling slavery a “moral depravity” and a “hideous blot,” he believed the practice presented the greatest threat to the survival of the new American nation. While he made some legislative attempts against slavery, the reality is that he profited directly from it, enslaving more than six-hundred people over the course of his life. One visit to his Monticello home makes that abundantly clear. The slave labor gave him sufficient time to study, explore science, drink fine wine, and write stirring prose.  (Ka-ching!)

And we’re still following the money today. We spent the night in Lafayette, Louisiana on the way home. The hotel clerk apologized after sneezing, explaining that they were burning the sugar cane. Sure enough, as we headed west on I-10 the next morning, we got big whiffs of a strange odor and saw burnt fields. The sugar cane leaves fall and pile on the ground prior to harvest. The farmers burn them, leaving the stalks easier to harvest. Without this practice, the farmer would be hard-pressed to survive because it reduces production costs and improves the quality of the product delivered to the factory. (Ka-ching!)

But the smoke contains chemicals that linger. Dozens of scientific studies have purported to show harm or risk to the health of those who live near sugarcane fields in Brazil, Mexico, Hawaii, Louisiana and elsewhere, and concluded that eliminating the practice led to improved health outcomes.

With money, comes fame, power, and the freedom to do as you choose. Ben Franklin was wrong when he said, “Our new Constitution is now established, everything seems to promise it will be durable; but, in this world, nothing is certain except death and taxes.” He failed to include the accumulation of wealth, something that apparently is baked in our DNA. And our lust for money may, in fact, lead to the erosion of our constitution.