FOOD IS FAMILY: FAMILY IS COMFORT 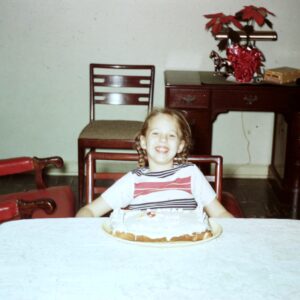 My earliest childhood memories revolve around food with family in Baytown, Texas. While we had a formal dining room, most meals were eaten in the kitchen. My brother and I had our own child-sized table and chairs while my parents dined at the big one. Standard fare included southern favorites. On fried chicken night, I was given the wing while my sibling enjoyed the drumstick. (Hmm. Were they not allowing us to sit at the big table so we wouldn’t see them scarfing down the thighs and breasts?)

Gravy made with chicken grease poured over white bread was the most important part of the meal. Pigs in the blanket, spaghetti, and pancakes were other dinners my mom routinely placed on the table. Interestingly enough, brown sugar topped the pancakes, syrup was not an option. (Who knew?)

Eating out was a special occasion. We frequently hit the Tower Restaurant Sundays after church. My brother ordered fried fish but insisted on honey as a condiment. My favorite was Mrs. Morino’s Mexican Restaurant. Hot corn tortillas slathered with butter call my name to this day. Yum. Oh, and add a bit of salt. OK, lots of salt. And I’ll never forget Scotty’s BBQ.

We had our family traditions. Mom would make chocolate chip cookies and Dad would smear them with oleo (same as margarine). Whenever we had pie, especially Mom’s fudge pie, ice cream was served. I was a teenager before I realized it was possible to eat pie without ice cream. Amazingly, I’d never heard of whipped cream as a topping.

Any lamb dish was off-limits. My father related that the smell of mutton stew emanating from the mess hall during WWII nauseated him. Lamb did not pass my lips until I was an adult. And, guess what? I like it!

One of my mother’s favorite food stories revolved around mashed potatoes. When I was in second grade, we moved to Decatur, Alabama for my dad’s work. I came home, marveling at how much better the mashed potatoes were at school. Bad move on my part; she investigated. Turned out that the school served real butter courtesy of surplus commodities from the Department of Agriculture. I guess we were too poor for such a luxury; oleo only.

By the time I got to high school, I discovered an aversion to shrimp that I didn’t understand. Eventually, my mother provided the back story. During my pre-school years, my dad’s brother killed himself and we began to help his family financially. Short on cash, my dad and friends shrimped in Galveston Bay. Apparently, we ate so much of them that I rebelled. Fortunately, I overcame that repulsion and now crave the crustaceans.

In later years, our family made treks to Houston, visiting a Japanese restaurant, Japanese steak house, Jewish deli, and French eatery. These experiences have left me open to all different types of cuisine, expanding my palate. I’m now a devoted sushi fan.

During the summers, we made treks to my mother’s parents in Tennessee. Aunts, uncles, and cousins would flock to the farm for a visit; lunch was the focal point. Mounds of food passed around the circular dining table. Fresh veggies cooked with bacon grease (Come on, what did you expect? It’s the South, y’all. Everything, scrambled eggs included, tastes better with drippings.) tickled my taste buds. Talk about fresh; one time I saw my grandmother shoot a chicken for the festivities.

From my dad’s side of the family, I retain a love affair with South Carolina peaches marinated in sugar and served cold from the fridge.

Sadly, many in our country do not share memories of bountiful food. The United States Department of Agriculture defines food insecurity as follows:

At times during the year, these households were uncertain of having, or unable to acquire, enough food to meet the needs of all their members because they had insufficient money or other resources for food. Food-insecure households include those with low food security and very low food security.

But we must have enough decent, healthy food for everyone in this country if we are going to live up to our potential as a nation. Yes, we have food stamps (SNAP), and one in seven of our neighbors rely on them. But are you aware the federal government sets the benefit amount at, on average, roughly $4 a day per person? Could you eat three decent meals a day at that rate? I can’t. The reality is sixty-one percent of Americans live paycheck to paycheck, with no financial cushion for emergencies such as illness, death, or job loss.

There is no quick fix for this problem. Blaming others for being lazy and on the government dole is not helpful. Sure, we have those who fleece the system; they are always with us. But the vast majority are hardworking citizens doing the best they can. Consider the fact that an estimated 160,000 military families experienced difficulty putting food on the table in 2020. Almost thirty percent of the junior enlisted ranks require assistance. Should we view these individuals as shiftless slackers?

What are your thoughts on a way forward?

Note: This essay first appeared in April, 2022 in the Midland Mutual Aid Food For Thought series.