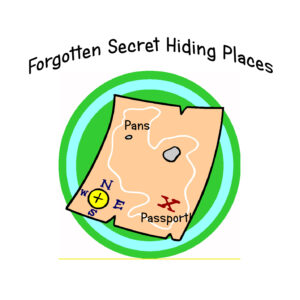 Part of my time during the COVID shut-in has been devoted to reorganization and storage upgrades.  The problem is, I can’t remember the special places where everything is hidden.

For instance, baking pans accumulated over the course of forty years were becoming unwieldy.  The Bundt pan was expensive and, who knows?  I might actually need it one day.  So, in January, I gathered it and numerous other cake and pie pans into a plastic container, relegating them to my small craft barn.

The problem?  I needed to bake a birthday cake for my daughter last week.  Frankly, it’s the first cake in several years.  After checking the usual pan storage place, my mind went into overdrive.  Where were the darn things?  Thankfully, I hadn’t lost that much memory in two months.  But, drat, where were the wire racks to cool the cake?  Not in the barn storage box.  Thankfully my husband remembered which cabinet they were stashed in. (About the cake, don’t get too excited.  I used a yellow Duncan Hines cake mix.  It was so good, however, with the special family homemade icing recipe, substituting coffee for milk.)

The scariest forgotten undisclosed place held my passport.  My daughter and I planned a quick trip to Mexico last week.  Of course, my mind said, the passport was in the safety deposit box. After a trip to the bank and ransacking the contents, neither mine nor my husband’s appeared.

Thoughtful on the drive home, I considered the possible search perimeter.  Eventually, the secret hiding place emerged from the cobwebs of my mind.  Early in the pandemic, we had bought a small fireproof lockbox to store at the ranch, filling it with cash and passports.  The box was locked in the gun safe.

Now, I’m downright flummoxed.  Is a list of all the secret hiding places in order?  How do you keep them secret if they are written down?  Storing it on the computer with a password might work, but what if you forget the password?

Just think, when I’ve left this earth my kids and grandkids will have a fine time finding stuff in odd places, trying to figure out a method to my madness.  Good luck with your search!