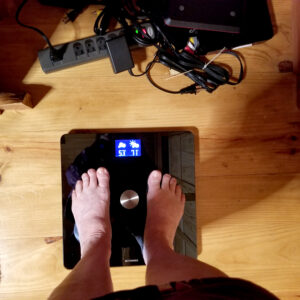 new bathroom scale scares the bejeebers out of me.  This fancy electronic version replaces the Wii Fit I had been using to calculate pounds melting away.  The ancient game console was spewing funky readouts—showing a weight loss from the day before all-the-while announcing ounces gained.  Also, turning it on daily was getting to be a pain in the rear.

And I—trying to be a triumphant skinny person—needed to know exactly what the score was. (According to my studies, if I want to be skinny, I must think I am skinny.  Ergo, I will act like a skinny person.)   Do you follow that?  If not, you are not alone.  The verdict is still out.

The bells and whistles include muscle mass, fat mass, total body water, number of steps taken, and the weather.  Yes, weighing as soon as you rise provides a preview of the day.  And, like all modern products, it sends the information to your smartphone.

The other day, while minding my own business, the contraption sent a message on my cell wanting to know who to share my weight with.   What the #%!??#&??  Yes, you heard me right.  I can share it with eight people.  Who in their right mind wants to do that?  The deleted button took care of that message.

The next demand was to identify a weight recorded in the database that was not mine.  As it turns out, right after purchasing the apparatus, my husband weighed himself.  The gadget eventually figured out it wasn’t me (he registered thirty pounds heavier) and insisted on knowing the identity of the human who had tramped on it.

After a second urgent message from the appliance, I logged in my husband, hoping to calm the riled beast.

The final indignity is that the newbie proclaims my heft is a bit more than my old trusted friend.

Ugh.  What’s next?  Will it send recipes, demanding a change in eating habits?  Scold if the pounds rise?  I’m frankly scared to find out what’s next.  If that isn’t enough to frighten you into eating like a skinny person, nothing will.