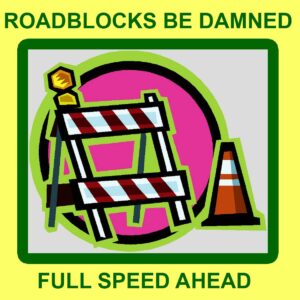 My recent trip to Williamsburg, VA made me think about roadblocks in life. While I consider myself successful, I’ve been guessing about how my life would have turned out had major roadblocks not foiled my plans for college.

A visit to Williamsburg in the 1960s left me in love with William and Mary. I also applied to Vanderbilt University (where my father attended graduate school and my brother received a football scholarship the next year), and Duke University.

All of them dumped me.

I did my best, I really did. I graduated ninth in a class of over four hundred students. Had my typing and band grades not been so low, my ranking may have shot up the totem pole. I had so many extracurricular activities such as band (officer), Anchor Club (officer), Honor Societies, and Girl Scouting (attended an international event) it wasn’t even funny.

My only downfall was that my SAT test score was good but not great.

Adrift, I entered the University of Texas. Now, today going to UT sounds like a great accomplishment, but please understand, in my era open enrollment prevailed. If you graduated from high school, you could attend.

My brother became disenchanted with the football program at Vanderbilt after his first semester and gave me a call. I went to the admissions office, filled out an application for him and signed it; he began the spring semester. Easy as pie!

If you look up roadblocks to success on the Internet, you find they are mostly clustered around our internal makeup. Here is a sample:

These internal traits certainly can keep us from success. However, in my case, none of these applied. (OK, maybe the problem could have been that my dad did not have a crony at Vanderbilt who would let me in as a legacy student.)

As a culture, we ignore the fact that, even if you have a healthy makeup, outside forces can throw up a roadblock. Pull yourself up by the bootstraps, they say. The American Dream is alive and well. We can become upwardly mobile through hard work in a capitalist society with few barriers. And if you fail, something is wrong with you, not the system.

Redlining is a wonderful example of how barriers failed to allow persons who had the right stuff to succeed. Its development started in the 1930s. Neighborhoods were ranked from “A” to “D”. “D” areas were marked in red and signified areas where property values were most likely to decrease. And, surprise, surprise, most of the “D” areas were inhabited by MINORITIES. Thus, regardless of their income or abilities, redlining blocked their access to secure mortgages from mainstream banks.

FINAL THOUGHTS ABOUT ROADBLOCKS TO LIFE

If I had not encountered the roadblocks, my life would most likely have been entirely different. Would I live on the East Coast? In New York? Would I have children? I’ll never know.

One thing is certain. I’ll follow my mother’s advice to “Do your best. You don’t have to be the best.” Although, as a perfectionist, its hard for me to not get upset when I am not the best, I work on it.

Furthermore, I’m not going to sit around, twiddling my thumbs, blaming the system for my roadblocks. In the end, the SAT score did not determine my ability to be successful in an academic setting. I graduated from UT in three years with honors, completing hours for a degree in French, psychology, and a minor in social work. Additionally, a Phi Beta Kappa key sits in my jewelry box. I completed my MBA at University of Houston with top grades, despite barely scoring enough on the GRE to gain admission. So much for standardized testing.

Roadblocks be damned! Full speed ahead. The reality is that roadblocks in life (whether internal or systemic) are a part of human existence. You never know what path you will discover when you set out to go around the barrier.