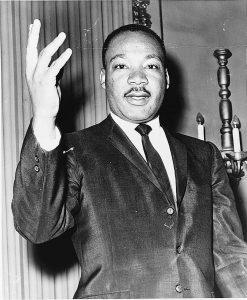 Dr. Martin Luther King changed my life in profound ways. He galvanized people of all races and sexes to take action to make equality a reality. For this, I am genuinely grateful.

As a woman, I was born into a society that denied me fundamental rights that we take for granted today. Consider this:

And, my ability to make a living wage blossomed. In 1950, 26.8% of all women in Texas were paid workers. By 1984, the number had grown to 56%. However, women mostly held positions such as secretary, sales clerk, bookkeeper, waitress, cashier, domestic, teacher, nurse, typists, and nursing aide. They earned 64% of a man’s median income. By 2017, the wage gap had decreased to 81.3%

We’ve come a long way in my lifetime, but we still have miles to go. It is incumbent on all of us to do what we can to ensure that everyone has the opportunity to fulfill their potential.

In closing, I offer this quote from Dr. King: