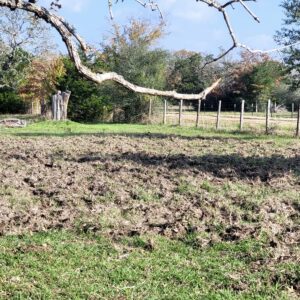 I hereby declare war on feral hogs. It seems as if I have vanquished the mice from the house, haven’t seen them in a while.  I need a new enemy.  The truth is, we all need enemies. Allen Faulton describes the phenomenon eloquently.

WHY I SHOULD DECLARE WAR ON FERAL HOGS

After returning from Colorado, I discovered they’d been on a rampage and tore up two areas of my pasture. They are bad news!

Texas A & M University states that “the feral hogs seen today are descendants of domestic swine who were intentionally bred to reproduce quickly, often, and in large quantities. Male feral hogs can begin reproducing at 12 to 18 months old. Males are typically solitary individuals who can be territorial and will fight for the opportunity to breed. Female feral hogs can begin reproducing as early as 6 to 12 months old. Gestation only takes 115 days, and each litter contains 4 to 6 piglets on average. (And you thought rabbits multiplied rapidly!)

“Females are more social animals and typically travel in multi-generational groups of related individuals called sounders. These groups can range from 2 individuals up to 50 individuals and allow the hogs to better protect their offspring from potential predators. (I saw one of these large groups with my own eyes. I had to stop my car to let them cross the road.)

Furthermore, “The combination of being habitat generalists, having an omnivorous diet, and being highly reproductive has made feral hogs a very successful invasive species in many places around the world. Due to competition with native animals, their destructive foraging techniques, and use of water sources for wallowing, feral hogs often have a negative impact on the habitats they occupy. Additionally, they cause millions of dollars in damage to agricultural operations and pose serious health related threats where their range overlaps with domestic animals and humans.”

And, while I do not condone violence, I see no other way. Yes, there are hog fences but if I put it around the ranch, I am also blocking access to other wildlife.

Texas Parks and Wildlife says that “Though non-lethal means of reducing damage from wild pigs is sometimes effective at small scales, the only way to alleviate wide-spread impacts from wild pigs is to reduce the overall population. Lethal control measures are currently the only effective means of reducing wild pig populations. There are multiple lethal control techniques currently available to land managers and owners in the United States. However, no single method approaches the scale necessary to have a significant, long-term effect on wild pig populations across large tracts of land, and most certainly not at a national scale. The most popular methods of lethal control currently legal in the United States are trapping and dispatching, ground shooting, and aerial gunning.”

So, with permission from the government, I will plot my lethal control.  Hmm. Ariel gunning isn’t in the cards as I don’t own a helicopter and can’t afford to hire someone.  So, that leaves trapping and ground shooting.

Notice how they say trapping and dispatching.  Basically, there are too many of the critters around to catch and release so you catch and ……..  It is possible to haul them off to the food processor. We have one here, but I have no trailer to drive them to the butcher.

Hmm. I’d have to euthanize them. According to Mississippi State University “Appropriate measures should be taken to minimize stress to the animal and insure (sic) that they are dispatched humanely. (There’s that word again), Pigs can be easily dispatched using a firearm chambered for .22 long rifle or larger calibers fired precisely into the brain cavity. The brain shot will insure a quick, humane death while minimizing the amount of blood left in the trap. A shot placed about 2 to 3 inches above an imaginary line directly between the eyes, or at the midpoint of an imaginary line between the eye and ear, will effectively penetrate the brain cavity. Be careful not to shoot pigs directly between the eyes as this area is the beginning of the nasal cavity.”

Ugh! Trapping will mean I will be up close and personal at the kill. That leaves ground shooting, and I’ll have to be a crack shot. This enemy is going to be tougher than the mice. But I’m no quitter. More later. I need to map out my battle strategy!