WHAT CUBANS KNOW ABOUT THE OUTSIDE WORLD

Cubans know quite a bit!    According to Havana University professor Dr. Jorge G. Arocha, 31% of the population is online at Wi-Fi hot spots set up by the government in 2015. Seeing Cubans huddled in parks or outside government-run buildings staring at smart phones is not uncommon.  Only university employees with over 10 years of service are allowed internet connections at home–dial-up only. The privilege is not cheap.  One hour of a Wi-Fi connection costs 2 Cuban Convertible Pesos (CUCs), which is equivalent to $2.00.  Keep in mind that the average Cuban earns between 20 and 50 CUCs a month.

Then, there is what is called El Paquete (the packet), an illegal service that is Cuba’s largest employer.  Weekly, employees in large institutions download massive amounts of data that is compiled and uploaded outside of Cuba, including TV series (think Game of Thrones), magazines, news sources, sports, movies, and books.  They then sell the data to others, downloading it via a USB drive.  Those individuals, in turn, sell the information.  The packet can eventually cost 1CUC. 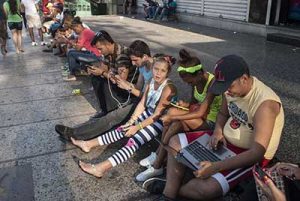 How do Cubans manage?  As many as 35% of Cubans receive money from Cuban Americans and many others receive money from relatives outside the United States.  More are working in the private sector which pays better than the government.  Lastly, all Cubans receive free medical care and cheap food through the use of food rationing coupons.  Because the coupons do not provide adequate food for one individual, many Cubans fail to report when a relative is deceased and continue to collect that individual’s food ration.

The Cuban Internet” downloaded from https://www.foreignaffairs.com/articles/cuba/2016-04-19/cuban-internetor on January 6, 2017.

“The Package (El Paquete) Is Illegal But It’s Cuba’s No. 1 Employer” downloaded from http://abcnews.go.com/International/package-el-paquete-illegal-cubas-number-employer/story?id=33279812.