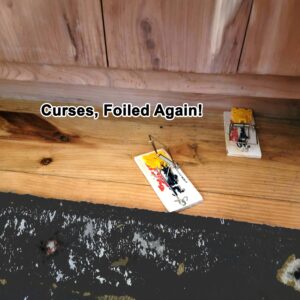 I am blankety-blank tired of writing blogs about my mousecapades. But the monsters are BAAAACK.

My blissful day was rudely interrupted a week ago when I noticed the mac and cheese spoon I had left on the stove in a spoon holder was licked clean and small pellet presents were deposited at the scene.  The bread was also attacked.  Fortunately, the beasts went for the plastic bag near the trash can filled with poison as well.

Weary, but confident, I set out traps with tasty peanut butter—my go-to solution. Additionally, I moved all foodstuffs from their reach.

The little boogers showed up, alright, but licked the traps clean and one was broken. Against my better judgment, my husband talked me into putting out his jaws of death trap. I should have known better, but desperate people will take desperate measures. 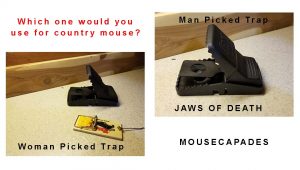 Later, after enjoying a most exquisite dirty martini made with Dripping Springs gin, I forgot about the draconian device and stepped on it while putting my glass in the sink. SNAP! My big toe! The thing even cut the skin.

Never one to give up, I utilized the remaining small trap and eventually nabbed one of the creatures.  Feeling cocky, I re-baited the contraption and waited patiently knowing there were more vermin afoot.

Nothing…. Nada…ZIP!  Hmm.  Maybe the poison did its deed.

Several mornings later, after checking the traps, I was enjoying a morning shower.  Movement caught my eye.  Yes…you guessed it.  A mouse strolled across the floor and into the linen closet.  As you can imagine, I was beside myself.  What to do?  I peeked in and then slid a big nice juicy piece of green poison into the closet.  Later there were signs nibbling.

By now, despondency was settling in.  While we realized the poison was doing its duty, the two of us take comfort in having closure.  I.e.: seeing the dead body. So, back to the store to load up on new traps to be placed strategically around the battlefield.  Hubby wanted the jaws of death once again in play, but I declined. My excuse was that, if it were successful, blood would be splattered all over the cabinets, and I would be the one forced to do the cleaning.

So, three traps, one with peanut butter and two with Swiss cheese, were tactically positioned. While lying in bed, my husband watching TV, we heard a snap!  Encouraged, I rushed into the bathroom only to discover it empty.  Deflated, I reset it and drifted into a restless sleep.

The next morning—no luck.  Settling with coffee in the great room, I mulled over my options. Then, my husband’s cursing rose from the bedroom.  The little s..t was running through that sacred spot. Hysteria and anger gripped me.  Defending my turf became my most important mission in life.  After some arguing and discussion, I grabbed the broom and began to chase the booger through the bedroom. Eventually, I cornered him behind the toilet and began to stab and pummel the devil.

Stunned, but undeterred, he snuck out of the bathroom and into the great room freeing me to deliver the final blows, stunning the fiend into submission.  Sweeping the carcass out of the house worked until I got to the door sill. Desperate, I removed the evidence of my dastardly deed with the help of a dustpan. (I’m not brave enough to pick the thing up by the tail like my mother did.)

Afterwards, heart pounding, I began to worry that I could unleash such emotions in the future.  Maybe I took out all my pent-up frustrations regarding U.S. politics, the economy, COVIID, and Russia out on the closest enemy I could find.

Sigh. At least I’ll sleep better tonight. The traps will be set.  As a former Girl Scout, I still believe in the motto “Be Prepared.”

You can find the other battles of my ongoing saga here: