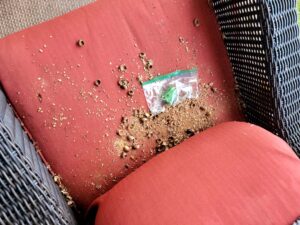 Just as I announced mousecapades were behind me, a dustup occurred, forcing me to turn my attention from my new enemy, feral hogs, to my old nemeses, the mice.

At least this time they didn’t trespass in the house. The varmints decided to park themselves on my party porch. The first clue was that my husband saw a mouse scurrying from under the couch while grilling. (The indignity of it all. This occurred on my birthday, disrupting my celebratory gin martini, dirty, with blue cheese-stuffed olives.)

Alarmed, I pulled back the sofa cover to spot a complete freaking mess! The creatures had gathered acorns and nesting material, making themselves at home. For some reason they were using asbestos. Not sure where that came from, perhaps from the air conditioning ducts under the house. (Another headache for another time.)

When I saw a live one, I started to scream like a banshee, hoping it would disappear. Then my husband began to make fun of me. Get something to prod it with, he said. (Notice, I’m doing all the work while he’s giving orders.) So, I procured a decorated cow rib bone from the coffee table and began to chase the thing around. Alas, it managed to hide on the porch, just beyond my reach. Because we weren’t indoors, I didn’t go berserk, chasing and swinging at it as I did in May. (Mousecapades Fury Unleashed.) Once it disappeared, I capitulated.

(Wait a minute! Decorated cow bone, you say? Run that by me again.  Ok. Here’s the scoop. We’ve had cows die on the property and the grands and I did some art projects painting the bones. Kids are so hard to entertain these days.) 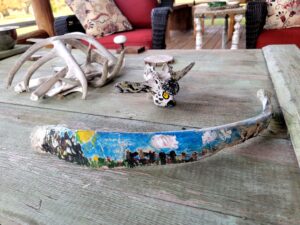 I looked closer—one dead mouse in the rubble. You see, the last time we had used the porch (October) I suspected visitors, so I left a baggie full of poison for them. (I’m becoming in-sync with my enemy’s thoughts and behavior patterns.) They love to chew through the plastic sandwich bag. 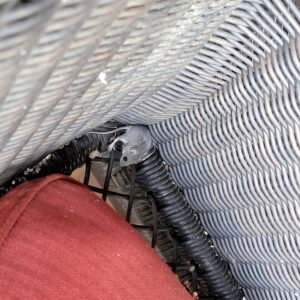 I immediately ripped off the chair furniture covers, only to find more acorns. It wasn’t until the next day while cleaning and sanitizing the furniture that I lifted a chair cushion. Two invaders stared at me. They weren’t moving fast though. They had chowed down on the poison as well. Half-heartedly I abetted their escape so they could RIP.

MOUSECAPADES BETTER PLANNING IN THE FUTURE

OK, I confess. The poison on the seat cushion wasn’t the greatest idea. When I re-cover it, I plan to put an odorous combination of black pepper, cayenne pepper, and

cinnamon in a container on the cushions and stow the poison under the furniture.

Hmm. Just discovered that mice are supposed to fear loud noises. I’ll have to harass my husband about this one. My theory of why the thing didn’t run is because it was three sheets to the wind on rodenticide.

He who laughs last, laughs best.  (I’m hoping this isn’t premature. I’ve got other enemies to vanquish.)

You can find the other battles of my ongoing mousecapades saga here: